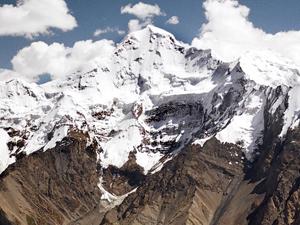 Some other peaks, most of these names will mean little except to experienced mountaineers, but these are some of the more famous peaks:

Adynge: In the the Ala Archa national park, rising to 4393m – and the slopes provide trekking territory rather than mountaineering.

Corona Peak: 4860m – Part of the Ak-Sai range in the Ala Archa national park – this mountain has six towering peaks – resembling a crown – hence the name (which means crown in Russian). There are 600m rock walls – and the Northern wall reaches 900m.

Gorky Peak: 6050m – located in the Pobeda massif, this presents one of the most difficult mountains to climbers – especially due to the rapidly changing weather conditions. The mountain presents a pyramid profile, and there are ice walls (upto 200 m high).

Free/Independent Korea: in the Ak-Sai range in the Ala Archa national park presents a challenging climb for mountaineers. The northern wall rises some 800m with steep rocks.

Jigit: In the Ogus Bashy massif on the southern shores of Lake Issyk Kul.

Karakol: 5216m – In the Ogus Bashy massif on the southern shores of Lake Issyk Kul.

Komsomol: On 1st May every year climbers gather to ascend this summit – and for many it is the first summit they conquer.

Military Topographers: (honest – that’s what it is called- !) 6873m – in the Central Tien Shan, Muztag massif.

Myra: 4940m – this mountain, with its twin peaks, is near to Peak Lenin and the two day ascent is often used as part of the acclimatization process for those climbing the taller peak.

Peak of the 19th Party Conference: also known as Peak Korzhenhevskovo, (not to be confused with Korzhenevsky in Tajikistan – whish is 7105m) – 5882m. It is easily visible from the Base and Onion Field camps at the foot of Peak Lenin and is sometimes used for acclimatization in preparation for an ascent on Lenin – although there are other more popular alternatives which don’t take as long.

Petrovsky: 4910m (although there appears to be some dispute – various figures are quoted from 4700 to 4900m) – standing over the Achik Tash camp, the base camp for ascents of Peak Lenin from the Northern (Kyrgyz) side – an ascent of this peak provides is often used as part of the acclimatization purposes for climbers before attempting the higher peak.

Pyramid: 5621m – in the Turkestan range Ogus Bashy: Located in the Djety Orguz valley, near Karakol, on the southern side of Lake Issyk Kul, this is the highest peak in the massif which contains other peaks such as Karakol and Jigit.This peak rises to 5215m with glaciers surrounding it. The northern slopes of the massif are cut deeply by deep gorges. There are a range of routes mapped out here from relatively simple ones to others which are much more demanding.

Semyenov Tien Shansky: this peak is not a simple climb but there have been many expeditions that have established some seven different routes to the summit.