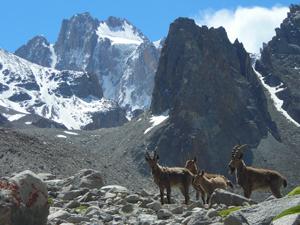 The year 2002 was declared the International Year of the Mountains by the United Nations. The highpoint of the year was the Bishkek Global Mountain Summit, which concentrated on the particular issues relating to life of people inhabiting the various mountain areas of the world. The idea for such a project had been proposed by President Akaev of the Kyrgyz Republic – and that may not be surprising when it is remembered that over 94% of the country lies above 1000 meters a.s.l. and 71% above 2000 meters. (Generally – anything above 1500 meters is counted as mountainous).

The country boasts a number of 7000-meter peaks, several of which have been climbed only in relatively recent times – and many virgin peaks – yet to be climbed.

Some mountains are even reputed to be nameless – It has been suggested in the Western press that there is a “Name that mountain” scheme where, in exchange for a fee, it is supposed to be possible to have a peak named after you. However, no-one here knows of such a scheme and it seems to be just another “modern myth”. However, in 2002 a 5000 peak was named after former Russian President Boris Yeltsin and another peak was named in honour of the Kyrgyz Police, then in 2003 a team from Azerbaijan were reported to have climbed a 5632 meter peak and named it “ Azerbaijan Peak ”. It is not clear if these are examples of previously unnamed peaks or simply renamig them. Also, in 2003, a mountain with two peaks was climbed and named “9/11” in memory of the events in New York on September 11th, 2001.

There are over 88 major mountain ranges in Kyrgyzstan , most of them forming the Tien Shan System – the Celestial Mountains . The others, such as the Chon Alai range in the South of the country belong to the Parmir system. They effectively divide the country into a number of quite distinct regions – especially between the North and the South, there is only one road connecting them (the main Bishkek-Osh road).

Most of the ranges vary in length from 100 kilometers to 300 kilometres – the longest, (Kakshaal) is 582 kilometres long and the Kyrgyz Range , lying to the South of Bishkek, is 454 kilometres long. Most ranges are between 10 and 40 kilometres wide.

It stretches across several countries and about much of the system lies in the territory of the Kyrgyz Republic . Extending over 2800km from the Chatkal range just East of Tashkent to Urumchi, (beyond which it rises again as the Bogdo Ola Range), they are usually described as being divided into Northern, Western, Eastern, Central and Inner ranges and most of them exhibit typical “alpine” features.

It is the central portion, south-east of Lake Issyk-kul which contains the very high mountain peaks such as Khan Tengri and Peak Pobeda, closely grouped together along ridges that stretch east-to-west. The area surrounding the Enilchek Glacier has two peaks over 7000 meters, (Pobeda and Khan Tengri – more about them is later), 23 higher than 6000 meters including 3 virgin peaks – and 80 more peaks between 5000 and 6000 meters including 14 virgin peaks.

The range is made up of sedimentary, metamorphic and igneous rocks.

The existence of this great range, (also known as the “ Celestial Mountains ”), has been known since ancient times. Despite the records and observations recorded by many early travellers, however, until the expeditions of the Russian geographer and explorer Peter Semyenov in the mid-nineteenth century, the Tien Shan Mountains remained “more legend than fact”. (Semyenov was granted the honorary title of “Tienshansky” by the Tsar for his exploits),

In fact the southern fringes of the system were first described by the Buddhist monk Hsuan Tsang in the seventh century BC, who wrote of ‘encountering nothing but ice and snow. The snow falls both in summer and springtime. Night and day the wind rages violently’. They also would have been visible to Marco Polo who (if we believe his account) travelled in along this route in 1273, with his father and uncle.

The Terksey Ala Too range – (the “shady” mountains) – is located along the Southern shores of Lake Issyk Kul.

The Kungey Ala Too range – (the “sunny” mountains) – is located along the Northern shores of Lake Issyk Kul – and form the border with Kazakhstan .

The Kyrgyz range run from Issyk Kul across the Northern length of the country – about 40 km South of Bishkek.

The Parmirs are found in the South of the country. Actually, only the most Northerly ranges of the system are in Kyrgyzstan – the Zaalaisky ridge

The Parmir-Alai mountains – which separate the Parmirs and the Tien Shan – consists of Turkestan (including a number of virgin peaks) and Alai ridges.

The ranges which are snow-capped throughout the year are distinguished by the phrase “Ala Too” – although in Kyrgyz the phrase means “many colours” – or “colourful” – or “bright mountains”. The snow-line lies at about 3600 meters.

The mountains of Kyrgyzstan hold many attractions for mountaineers and trekkers. For most of the Soviet period, (or as some locals refer to it – “in former times”), the region was off-limits to foreigners and even Soviet mountaineers had trouble obtaining the permissions necessary for an expedition. Although the system is less rigid these days, there are still some restrictions, and permits necessary, in certain areas – especially in the border zones.

The difficulties faced by mountaineers are exacerbated by the weather – it can snow suddenly and for several days at a time – increasing the risks of avalanches and crevices.

In particular: until recently Khan Tengi was thought to be only 6995 meters high – but the figure has been revised (and some people treat the new measurement of 7010 meters with an element of suspicion).

The country is so rich in peaks that there are some surprising omissions in this list. For example, the third major peak in the country, Khan Tengri, doesn’t appear simply because at only 7010 m. (or 6995 m.), its neighbour, Pobeda, is about 130 meters higher. Also missing from the list is Corona – or Crown Peak – which lies to the South of Bishkek.

Peak Pobeda – Victory Peak Peak Pobeda, is one of three 7000-plus meter giants in Kyrgyzstan . At 7439 metres, it is the highest mountain in the Tien Shan range…

Khan Tengri: lies in the Issyk Kul oblast near the border with Kazakhstan . (The name is translated variously as “Prince of Spirits” or “Ruler of the Sky”) Until recently…

Some other Kyrgyz Peaks

Some other peaks, most of these names will mean little except to experienced mountaineers, but these are some of the more famous peaks: Adynge: In the the Ala Archa national…

There are a number of base camps for mountaineers, trekkers, and others which operate during July, August and the first part of September. The camps have facilities for accommodating expeditions…