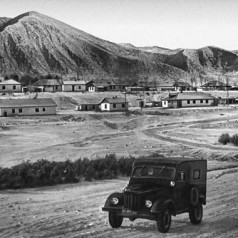 The region is located in the south-east of Kyrgyzstan, was first established November 21, 1939, entitled Tien-Shan region. December 30, 1962 the area was disbanded and its districts of republican subordination entered. At rynskaya area was re-formed 11 of December 1970. October 5, 1988 was reunited with the Issyk-Kelskoy area, December 14, 1990 was again called Naryn region. The area is bordered to the east of Issyk-Kelskoy, in the north – with Chu in the west – with the Jalal-Abad and Osh Oblast in the south – with the People’s Republic of China. The total area of ​​-45.2 km2. (Fourth part of the territory of Kyrgyzstan). Population – 249.1 thousand people. (According to the census, Provo dennoy in 1999 amounted to 5.2% of the population). The region comprises five districts of the (Ak-Talin sky, At-Bashi, Zhumgalsky, Kochkor and Naryn), 56 Ail okmetyu, a city – Eun-Nar, 2 towns and 122 villages.

Nature. The region is a mountainous region with complex topography, is located at an altitude of 1500 m above sea level and about 70% of its territory occupied by thorium ridges. Most of the major nye ranges: Kakshaal (the longest mountain range HYDRATED, differentiating Kyrgyzstan and China), At-Bashy, Naryn, Zhetim, Moldova, Too, Zhumgal, Susamyr. The prevailing height of ridges Comrade -3000-4000 m, the highest point – Dancoff Peak (5982 m), located on the mountain as Shaal. The ridges are separated by many valleys. The largest of them – the Naryn. From the south it is bounded by mountains baibiche and Naryn, north – ranges Kabak, Zhetim. These mountains in the east and closer together in one mountain nuyu system in the district of Kichi Naryn and Chong. Reserves to do the opposite valley, growing, stretching up the mountain Alabuginskoy. To the mountains: baibiche-Too-Too Jaman, Ak-Shyyrak, Ala-ren Myshyk characteristic steep slope, a short valley, and located conjugate to the right side of the mountain slopes: Zhetim-Too, Nur, Boora-Albas, Kabak, Moldova, Too , Sonkel different long gorges. On the incidence of Moldovan-Too ridge adjacent to the Keck-Irim, p divides them. Naryn. Ridge Ak-Shy cancer (Chaar-Tash), Naryn valley divides into two parts – Alabuginskuyu and Toguz-Toroskuyu. At-Bashynskaya Valley is bounded on the south-At-Bashyn sadm ridge on the north ridge and the Narn-Too-Too baibiche the west Jaman-Too. To the south of Al-Bashynskogo ridge located Aksai wife and Chater, Kölner Dom valley to the west – the valley of the Arpa. In the north of Naho dyatsya ridges Kara Jorge, Sonkel, Kabak, Zhum gal valleys Zhumgal and Kochkor.

The territory is rich of mineral eral resources. Large coal deposits were obtained in a concentrated pool Kabakskom Zhumgalskogo district. At the source of the River. Eka-Suu is located Zhetimskoe deposit of iron ore – the only one in Central Asia. There are deposits: Sandykskogo nepheline syenite, lead, zinc (in the areas Arsy, Ak-Tash-Koro, Kubaka, Ak-Cal), gold (Solton-Sary), etc. In Kochkor tion valley there are large deposits of rock salt, Noah. Everywhere there are oil field Denia various construction materials (clay to sand, crushed stone, gravel, marble), there is a set of thermal and mineral springs.

The climate is continental, the winter is cold and long. The average January temperature is – 15