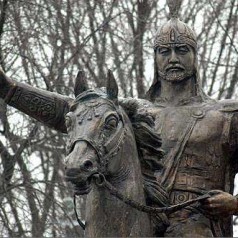 Residents of Kyrgyzstan offered to hand over the money to build a monument athlete Manas (which is proposed to put in place the Statue of Liberty in the center of Bishkek), as well as the monument to the famous writer Chingiz Aitmatov. It is reported by AKI. With their request addressed to the citizens of the State Directorate for the 20th anniversary of the independence of Kyrgyzstan.

Money may want to transfer to the account, details of which leads the agency.

In a separate request, according to K-News, the Government of the Republic appealed to the businessmen. Letters on behalf of the Prime Minister of Kyrgyzstan Almaz Atambayev, according to sources the agency sent to the country's leading companies – in particular, the largest cellular operator Kyrgyzstan, working under the brand MegaCom, and gold mining company, Kumtor Operating Company.

Atambayev himself (who in the past he was a businessman – led the industry group Forum) identified on the monuments of a million soms – about 22 thousand dollars.

The total cost of the monuments, according to K-News, is estimated at 28 million soms (about 627,000 dollars).

Change the Statue of Liberty monument in Bishkek Manas (Kyrgyz national epic hero), the Kyrgyz authorities have decided to mark the anniversary of independence (which will be celebrated at the end of August). Member of Parliament Egemberdiev Ermatov said on this occasion that the current statue does not personify the unity of the nation, but the Manas – a hero who fought for all the years of independence of the Kirghiz.

At the disposal of the government on this issue stated that the decision was made to promote awareness among the citizens of Kyrgyzstan, especially among the youth, high ideals of national unity, signs the unconditional spiritual guidance to facilitate a dynamic advancement of the country to prosperity and progress.

Sketches of monuments, and Manas Aitmatov can be found here.

Statue of Liberty, which is now expected to be dismantled, is at the center of Bishkek since the mid-2000s. She put on the spot where stood a monument to Vladimir Lenin.