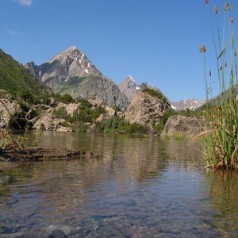 Land use. Soil erosion in the hills, pasture degradation

On the territory of the republic, according to the Soil Map of the Kirghiz SSR» (AM Mamytov, etc.) identified the following groups of soils: soil slope piedmont and foothills, intermontane basins of the soil, soil syrt uplands, the soils of mountain slopes, which are identified within the soil dry steppe and steppe zones low mountains, the forest-soil meadow-steppe zone of middle, high mountain subalpine zone of the soil, soil alpine zone, alpine heath soil. Mountain regions of Kyrgyzstan characteristic large diversity of soil and different levels of soil fertility.

The mountains, foothills, intermontane basins, mountain plains are located in close physical and geographic relationships, and they have their own specifics in the economic development and use, the use of tools and processing equipment. A complex combination of natural conditions and the presence of salinities rocks, operations, etc. cause widespread land reclamation disadvantaged – saline, saline, eroded, rocky, marshy, which determines the complex, often dysfunctional, land-reclamation land situation in Kyrgyzstan. According to land registry, the republic has a total area of ​​saline land 1170.4 ha, including slightly saline – 398.6 thousand ha, moderately – 399.1 hectares, 301.1 hectares of strongly, salt marshes -70.8 ha. Along with saline, increasing the area of ​​wetlands due to the omission of drainage networks.

The real scourge of the republic's agriculture is soil erosion, the whole agricultural area of ​​the republic is considered potentially dangerous erosion. The total area affected by erosion, 6435.0 thousand hectares, including arable land – 770 thousand hectares of pasture, 4546, 7 hectares. In Kyrgyzstan, according to the cadastre, the area of ​​land affected by water and wind erosion, is about 5 million hectares, or 45.7% of the total area of ​​agricultural land. Of these, 720.6 hectares is arable land, subject to water erosion. One of the extremely negative factors that contribute to water erosion is the presence of slope areas. Of the total area of ​​arable land of 614 hectares, there are about

In addition to water erosion, significant damage to agricultural land causing wind erosion. The area of ​​land in dangerous deflation Kyrgyzskoy Republic, where the wind speed reaches 20 m / sec. above, is about 5386.0 thousand hectares. Human activities acts as a factor in the development of erosion processes that occur as a result of poor implementation of advanced methods of irrigation, tillage, etc.

Over the past 10 years in the process of land reform in agriculture addressed mainly issues of redistribution of land, at the same time almost stopped all work related to improving the quality of agricultural land, which led to a sharp decrease in soil fertility, which is estimated for the period as critical.

The sharp decline in work on the application of fertilizers, especially organic, ignoring the cultural practices that protect soil from erosion, preserving her fertility, such as the cultivation of beans, legumes, and siderite, the use of irrigated agriculture in slopes steeper than 10 degrees and the plowing of slopes steeper than 15 degrees in the dry lands , the mass destruction of forest plantations and shelter belts, quarrying, etc. greatly accelerate erosion and increase the degree of erosion, increase the area of ​​eroded land, causing great damage to the ecological balance and acceleration of desertification processes in the republic. Despite this, during the period of land reform has become almost impossible to obtain a wide and accurate information about the processes of the profound changes occurring in soils, sources of information about the processes were the soil, soil erosion and land-reclamation survey. However, these works are now reduced to a minimum due to financial constraints, although their significance, they should be in operation during any economic situation in its entirety. Solving the problem of soil erosion associated with a certain complexity also because it involved ministries and departments, experts of different profiles. This work is devoid of any coordination.

– An inventory of arable land of mountain areas (and the current state of soil fertility, resistance to erosion, compaction);

– To develop and resource pochvoohrannye technological methods of soil;

– To Agroecological zoning of mountain soil resistance to anthropogenic stress;

– To develop comprehensive measures to combat erosion and other degradation of mountain soils;

– Create a data bank on mountain soils and to regulate their fertility;

– Organization of the territories of anti, anti agroforestry;

– Teaching people how to combat soil erosion, use of modern technologies of conservation tillage;

– Accounting, management of water and modern irrigation technology in order to prevent erosion.

Problem 2. The problem of pasture degradation.

Rangelands of the Republic. The total area of ​​natural pastures Kyrgyzskoy Republic is 8.9 million hectares Among them: 3.9 million hectares of summer, spring and fall 2.7 million hectares, 2.3 million hectares of winter Vegetation types that are used as natural grassland, are extremely diverse, with different yields. Pastures have always been of the national wealth, and, accounting for 85% of all agricultural land, are the main livestock forage. Pastures are of paramount importance in sheep, as in the diet of sheep grazing natural forage is more than 70%. In addition, the vegetation of natural grassland habitat is home to numerous species of medicinal, ornamental plants, and honey. This is a natural habitat and forage for many wild animals. Therefore, the problem of grazing is closely related to pharmacology, beekeeping, tourism and hunting economy of the Republic, as well as the organization of natural parks, reserves and sanctuaries.

Degradation of pastures. Excessive pressure on pastures in the recent past, ad hoc grazing, lack of interventions to improve the natural grassland of the year led to a deterioration of pasture herbage. Congestion cattle grazing negatively affects their ecological status. Significant overgrazing leads to the destruction of the sod pasture plants and the mechanical structure of the soil, reduce productivity and, ultimately, to erosion. According to the Institute Kyrgyzgiprozem average yield of pastures in the Republic for the period from 70 to 90 years decreased by 14%. Much of the area (about 25%) moderately and severely degraded. Degradation is particularly susceptible to spring and autumn pastures. The deterioration of pastures is a danger not only in terms of reducing stocks of pasture forage. Pasture degradation leads to the disappearance of some of the most sensitive to grazing, plant species, loss of unique mountain landscapes, biodiversity and the depletion of the gene pool. In addition, pasture erosion on mountain slopes contributes to the development of water erosion, which is an irreversible process in the mountains.

At the present time, in connection with the liquidation of collective farms and state farms and the formation of many new small businesses has changed and the system of using pastures. Virtually all existing businesses in the livestock throughout the year is contained in the spring and fall of village pastures. Owners of livestock are not able to overtake him on the distant distant pastures due to lack of transport and finance. Sharply declined in recent years the number of livestock in the Republic did not solve the environmental problems associated with grazing animals on pasture. Removal of overloads for grazing only affected remote summer pastures, where small farms and farming does not wander. All livestock is contained now in the spring and fall of village pastures, which are currently experiencing a much greater burden than previously observed. This imbalance in the allocation of livestock grazing leads to further degradation of village grazing lands. Under the influence of animal grazing continuously on the same site, the soil is compacted, and reduced infiltration. If grazing is organized properly, it reduces the vegetation cover, soil bares and accelerates erosion. Damage to pasture, is due to grazing on pasture areas are too large herds or too long stay animals in pastures without ensuring their recovery. As a result of reduced crop yields and pasture feed reserves, growing pasture grasses inedible weeds, pests and poisonous plants, increasing pasture zakustarennost (especially thorny shrubs), increased grazing and water erosion (presence of grazing trails, ravines, gullies, etc.) disappear from the pasture hospitality grass species, there is a change in dominant vegetation communities.

Three. Protection of grassland degradation, development of measures for their improvement and protection.

A) Monitoring of pastures. To preserve the natural potential of the pasture, it is necessary to constantly monitor the correctness of their use, time to plan and carry out measures for their improvement, which is possible only with proper monitoring, evaluation of rangelands. Monitoring – a flexible and accurate tool for the management of rangeland management. Results of monitoring should be used to adjust the rules and methods of grazing management on rangeland areas.

territory of the Republic of pasture. In order to protect rangelands from degradation is necessary to maintain optimum pasture load, to comply with a system of seasonal grazing areas. The question of assessing the level and timing of livestock grazing that pasture can sustain, is a complex problem, in which the economy is the main but not the only acting force. Should be taken into account environmentally acceptable load on mountain soils and vegetation, or in the future it will be impossible cattle and pastures degraded. Should alternate between periods and the multiplicity of overgrazing, combining all this with efforts to care for them and improve. Timing and frequency of use of pastures should be established based on two basic requirements: Getting the most from the pasture nutrients. Preventing the degradation of pasture grass and improve it through proper use.

The maximum pasture productivity is possible only if the optimal load on them. Increasing the load above the optimum leads to a decrease in the number of edible mass, decreased animal productivity, deterioration of pastures. Underutilization of grazing leads to loss of forage. One of the methods of preserving and increasing the yield of forage grasses, as well as improve the botanical composition of grass pasture is a one-year vacation. The two-year and three pasture rest is not appropriate, since the second year of rest yield increase is insignificant and does not compensate for crop losses during the holidays. There are two basic ways to use the pastures: shotgun (or free) and paddock. In haphazard grazing forage plants are unable to relax. Inedible plants and plohopoedaemye depress forage grasses. Grazing paddocks to avoid most of the shortcomings inherent in haphazard grazing. Given that grazing at different times and frequency of grazing is not the same effect on pasture grass, you need to alternate terms and multiplicity of use of grazing areas within the season on an annual basis, ie pasture rotation. The introduction of pasture rotation grazing can increase the capacity by 20-35%.

The main ways of improving pastures are: removal of weeds (inedible, poisonous and harmful), and thorny shrubs, fertilizing with mineral and organic fertilizers, irrigation (where possible) of desert, steppe and lugostepnyh pasture reseeding grass, cleaning stones.

An effective way to control weeds in mountain pastures is the use of selective herbicides, but in light of the requirements of environmental laws chemical methods of control in pastures can be used with certain restrictions.

Of the non-chemical methods to control weeds, grazing on the plains and gentle slopes mowing them effectively to contamination during budding – flowering, after grazing.

Of the fertilizer on the pastures are most effective nitrogen and phosphorus. First of all, it is desirable to fertilize pastures, where the return on fertilizer will be the greatest. These include fescue, and Yezhov Meadowgrass types of meadow and lugostepnogo of middle zone of the foothills and is relatively clean of weeds. It is preferable and cheaper than the introduction of environmentally friendly organic fertilizers.

Solving the problem of pasture degradation will preserve the natural potential of the natural grassland of the Republic, in sufficient quantities provide livestock grazing full feeds, which will contribute to sustainable development in mountain regions.