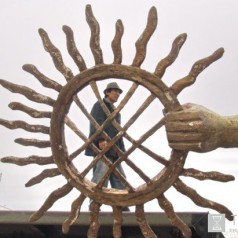 In Bishkek, will soon be dismantled Statue of Liberty (Erkindik), according to K-News. In its place the authorities plan to erect a monument athlete Manas – the hero of the Kyrgyz national epic.

Change of the monument to the agency told the Kyrgyz parliament deputy Egemberdiev Ermatov, which is part of the commission to celebrate the 20th anniversary of independence. The current statue does not personify the unity of the nation, but the Manas – a hero who fought for all the years of independence of the Kirghiz, – he said.

According to Kginform, the dismantling of the Statue of Liberty has already begun. The cost of removing, as the source, are conducted with the approval of the capital's municipality. In the future, the statue will be moved from the city center to another location, where it is – as yet unknown.

Making a monument Manas sculptor entrusted Bazarbekov Sydykov. The monument is said to be made of bronze, its height of nine meters. The installation of a new monument will be completed by the end of August.

AKI reports that on changing the government of Kyrgyzstan decided monuments appropriate order. It is noted that far from the monument Manas is also planned to erect a monument to writer Chingiz Aitmatov. The decision was made to promote awareness among the citizens of Kyrgyzstan, especially among the youth, high ideals of national unity, signs the unconditional spiritual guidance to facilitate a dynamic advancement of the country to prosperity and progress – the document says.

Against the change of monuments made public organization Fund of progress. The idea of ​​government is regarded as stupid and harmful. The Statue Erkindik '- a very good character, symbolizing the freedom that we have received 20 years ago. Propaganda epic' Manas' is undoubtedly needed, but the installation of new sites – not the best way to do it – said the organization's leader Adil Turdukulov.

Statue of Liberty standing in the center of Bishkek, was established there in the mid-2000s. She put on the spot where stood a monument to Vladimir Lenin.