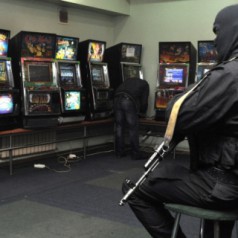 Interim Kyrgyz President Otunbayeva was in favor of tightening the rules of gambling. The corresponding video message posted on the presidential website.

Otunbayeva said that the activities of casinos and slot machines in Kyrgyzstan has a detrimental effect on society, leads to the ruin of the people. She also added that overseas casinos are often used for money laundering.

At the same time, calls to ban all gambling in the country (and refuse charges, which come from the casinos in the state budget) is not supported Otunbayeva. The head of the republic declared that it is sufficient to take action to obstruct the work of such institutions.

It ends with Otunbayeva appeal: Let us unite, we will not give the casino barons to tear our families and our youth, tomorrow will be too late.

Earlier in the Kyrgyz parliament to ban the activities offered at all casinos. The corresponding bill prepared by the deputy from the opposition party Ar-Namys (Dignity) Bakytbek Dzhetigenov. The document, according to K-News, September 19 is seen in the parliamentary Committee on Budget and Finance.

Some MPs, however, called only restrict the activities of a casino (for example, to allow gambling only in certain areas). When I was in America, in Las Vegas, I saw that the state at the casinos and slot machines earn big money. So, maybe we should not prohibit gaming activities, but only to introduce tough conditions, – said on this occasion the deputy Omurbek Abdrakhmanov.

In turn, the representative of the Ministry of Finance, was present at the committee hearing, said that every year from the casinos and slot machines in the budget in the form of taxes received 403 million soms (about nine million dollars). He stressed that the prohibition of gambling budget will have to seek additional funds.