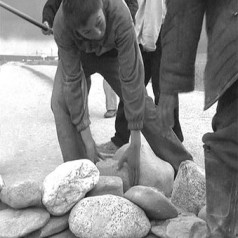 In Bishkek high school number 78 on the day put the play on the theme of last year's coup. Video of this performance posted by portal Comment.kg.

In the course of the play was reproduced and the storming of the White House (this episode can be seen in about three and a half minutes after the start of recording). The building represented a large sheet of paper with painted windows. Behind him was hiding one of the students, who at the same time supporting a sheet of falling.

Group of pupils in national Kyrgyz headgear moved to the White House, shouting Bakiyev ketsin! (Bakiyev, go! '). Then some of them, writhing, fell (as it were, from the shots). The children, depicting the rebels retreated.

Actually since the capture of the White House is not on record. In the play did not get the episodes, and the looting of government buildings and shops of the capital.

According to the website, the school of this kind of decided to bring in their students heroism.

According to Vesti.kg, staged in accordance with the Ministry of Education, according to which schools should be event patriotic character. The press service of the ministry said the publication did not see nothing wrong with this statement.

The revolt took place in Kyrgyzstan on April 6-7, 2010. The unrest began in the north, and then spread to the capital. April 7 participants in the coup after the storm took many hours of the government building. Soon after President Kurmanbek Bakiyev, left the country. They were replaced by interim government.

At the storming of the White House were killed dozens of people. Later, the new authorities of Kyrgyzstan declared dead heroes of the revolution.