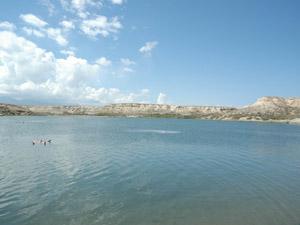 For most of the way, the road which runs around the southern shore of Lake Issyk Kul hugs the coast quite closely.  About 30km from Balykchy, however, if veers inland and at Bokonbaeva swings back northwards, towards the shoreline.

About halfway alonog this stretch, just after the village of Kara Koo, there is a turnoff towards the lake, alongside the river Ak Terek.  It is not a good road – it is not asphalt and so is neither "fast" nor comfortable.  After 13km, the road brings you toa small lake Kara Kol, which is also known as "Salty Lake" or "Myortvoye Ozero" – Kyrgyzstan’s own "Dead Sea".

Myortvoye Ozero lies in a hollow, cut off from Issyk Kul by small hills – dusty, rocky, outcrops covered by shrubs.

Issyk Kul derives its name, ("Warm Lake"), from the fact thatv it never freezes over and one of the reasons for this is that it is a salt water lake.  Although there are over 80 streams and rivers feeding water into the lake, there is no outflow, and evaporation leaves a higher concentration of mineral salts in the water that remains – lowering the freezing point.  The Dead Sea in Israel is also a "salt lake" – with no outlet, but the concentration of mineral salts is such that there are other side effects … perhaps the most famous of which is that increases the bouancy of the waters so that it is possible for a person to simply float on the waters.

Myortvoye Ozero has the same same feature.  The minerals within the water support the weight of a person lying on the surface.

There is a small beach and in the summer there can be quite a few people on the beach – swimming in the lake and coating themselves with black mud which is said to be therapeutic.  Some of the local people even claim that drinking the waters is healthy – but we wouldn’t recommend this.  At the moment there are no facilities at the lake, although some local yurts are set up nearby during the season which offer some local cuisine.