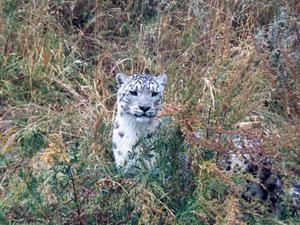 Tigers and cheetahs once roamed through the forests of Kyrgyzstan – but the Snow Leopard is the only example of the “Big Cats” still to be found in Kyrgyzstan.

They are extremely athletic – capable of making huge leaps over ravines – and can bring down prey almost three times their own size.

They can live up to 21 years old in the wild and fully grown can measure 100-130 cm long, (and the tail can be 80-100 cm as well).  At the shoulders their height can be 60 cm. The males are heavier than the females (45-55 kg as opposed to 35-40 kg).  They have a distinctive smokey-grey fur, tinged with yellow and with a pattern of dark grey or black rosettes, or spots.  The fur is made up of long strands – the wolly fur on the belly can measure 12cm long.  The combination of short forelegs and long hinig legs provide for agility in the steep and rugged habitat in which they are found, and the large paws help it to walk on snow.  The long tail serves two purposes – helping balance, and and to wrap around the body and the face for additional warmth when resting.  To help it breathe in the high altitudes which are its natural habitat, it has a large breast cavity and nostrils.

One of the things which set the snow leopard apart from the other big cats is that they are unable to roar.

They are found in 12 of the countries of Central Asia – in isolated areas from Afghanistan (where they have recently been enduring an increase in hunting/poaching) and Tibet to Lake Baikal. The whole of the former USSR was thought to have 1000 specimens – out of a total world population of 7000.  Kyrgyzstan was thought to have the largest population in the former USSR.  Although it is not known how many there are remaining in Kyrgyzstan, it is thought that the numbers of snow leopards have decreased sharply in the since about the time of independence (from about 1200-1400 to about 650, or less – a 2002 estimate suggested 650 but in 2003 another suggested that there were only 150-200 animals left in the Republic).  Hoever, the country is still thought to be the home to the third largest population in the world (after China and Mongolia).

The natural habitat of the snow leopard is in mountain areas – at altitudes of 2000 – 6000 meters. They are equally at home in steppes, coniferous forest, high mountain meadows and even rocky crags. They tend to descend in winter to lower altitudes – following their migrating prey. They tend to cover a large amount of territory – perhaps due to the lack of abundant prey.

Only 5% of its natural habitat in Kyrgyzstan is protected.  They are normally found in the southern regions – in the mountains of Osh and Batken and along the border with China.  Generally, they are to be found in more remote mountain regions, for example around Chatkal and Lake Sary Chelek – although these areas have always had a smaller poplation as the snowfall is greater and a lower availabilty of prey – but they have also been seen in Ala Archa (in the Kyrgyz Krebet not far from Bishkek), and the in Talas oblast.   There is a, stuffed, specimen in the Ala Archa Museum.

They tend to be active around dawn or dusk and tend to be solitary animals – although a couple may hunt together during the breeding season (between December and March).

They are known to both stalk their prey and also to ambush it. Usually the main part of their diet comprises of wild sheep and goats – but they also feed on other animals, (such as marmots, deer, hare or birds).  Sometimes they might attack livestock – sheep, goats, horses, or even young yaks), if their natural prey is not available.  They rarely, if ever, attack a man – which may seem surprising as they are so well adapted to their environment – and man so poorly, that he is at a distinct disadvantage and would make easy prey.

They tend to eat slowly and have been known to remain at the sight of a kill – to ptotect it from scavengers – for several days, until they have consumed it all.

A litter can be a single cub – or as many as five. Usually cubs stay with the mother for their first year – and only really reach adulthood at about three or four years old. Sometimes a pair in captivity have been known to give birth but it is very unusual.

In nature the only real enemy of the snow leopard is the wolf – but its most dangerous and ruthless enemy is in fact, man. Hunting or trafficking in live animals is illegal (although a limited number of licenses for hunting are granted every year – and are very expensive). The Soviet Union originally banned hunting the snow leopard in 1959, but every year some 50 specimens are caught for zoos and other purposes. It is claimed that about half of the animals currently found in zoos throughout the world are descended from animals exported from Kyrgyzstan.

The sytem of protected areas was strictly enforced in the Soviet period – but the collapse of the system and disappearance of the subsdies necessary to support it, has meant that poaching has been steadily increasing.  For example: In 2003, a Circus troupe from Moscow was caught trying to smuggle two young specimens out of the country, to sell in Russia. The vehicles were impounded and the case is yet to come to court. On the other hand – a local newspaper reports that a hunter who killed 53 of the animals was awarded a government prize.

Apart from being prized as a living specimen, they are hunted for their fur and their body parts (organs and bones) are used as ingredients in traditional Chinese medicine as a substitute for tiger bones. It takes about six to eleven skins to make a fur coat.

Where some Kyrgyz family have a snow leopard skin adorning their yurt, (which is not very often), they usually claim that it is a family heirloom, passed down over the generations.

There are fixed penalties for poaching and/or trading in body parts – currently 60000 som or 5 years in prison.

Apart from being hunted – which probably represents the biggest threat to the species – they fall prey to a variety of disease, and malnutrition when prey is not available.  There has been a reduction in the amount of prey available – as well as in the virgin territory which serves as their natural habitat, putting pressure on them.  Also, sometimes the cub from a litter may be abandoned.  In the wild, it is thought they can live for about 10 to 12 years.

Although the Kyrgyz Republic has not yet joined the CITES convention (Vonvention on International Trade in Endagered Species), it does enforce the regulations and reports to the Moscow office of the organization.

Work is underway to maintain protected areas and in 1999 the Kyrgyz-German Snow Leopard Project was started on the initiative of the German geologist Torsten Harder who persuaded friends and the authorities to support him in creating a small, mobile unit to monitor the animals lifestyles, their habitat and migration patterns – and have confiscated weapons, traps and hides. As a result of their work a number of poachers have been caught, prosecuted and convicted.  They have rescued a number of animals from poachers – one is now in the zoo at Zurich, but the others have been placed in a special enclosure and it is planned to return them to the wild.

Measures have also been undertaken to reduce the illegal trade in fur, bones and cubs.  In three years, 154 poachers were caught and 12 of them weere sentenced to prison terms.  As well as impounding skins and other animal parts – a large number of weapns and traps have also been confiscated.

As a result of these activities – several other rare animals have also received added protection.

The snow leopard is the symbol of Bishkek, the capital city.

The title “Snow Leopard” is awarded to the most outstanding climbers and mountaineers in the country – who have climbed all the 7000m peaks of the Tian Shan and the Parmirs.

The closest that most tourists are likely to come to a Snow leopard, (known locally as “Bars” – Барс) is in the statues that line the road from Bishkek to Issyk Kul, through Boom Gorge, or on the Bishkek city flag, or on the label of a bottle of beer named after this magnificent animal.