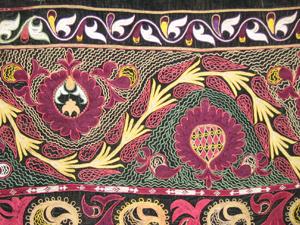 Embroidery has always been a female craft. Many embroidered items were intended for practical use a well as for decoration of the yurt. Along with colorful fabrics, mats and felts, embroidered items made a cozy ensemble decorating a man’s shelter.

Many household articles were decorated with embroidery, including various sacks and bags used in everyday life. Parts of the yurts were also embroidered, including decoration stripes called djabyk bash, and the curtain at the entrance of the yurt called eshik tysh.

The traditions of this genre of art have been kept since time immemorial, passing from mother to daughter. Girls were taught to embroider since childhood. Of course, not every girl could become a crafts women or saimachy.

Patterns are usually created by very talented needle women. The outline of the pattern is first laid on a cloth and then the pattern is embroidered. Very skilled needle women embroider by memory without initially laying a pattern; the improvise and sometimes vary patterns taken from other articles.

Not only the arrangement of pattern and color, but also the material and embroidery technique used play crucial role in creating the textures of embroidered articles.

Completely filling some elements of a pattern with stitches is characteristic is older works. In this type of embroidery a chain stitch winds along the outline of the pattern, then curves inside the pattern and lies close to previous chain until the whole shape is filled. Sometimes a space inside of a shape is left blank. At times these spaces are filled with a contour pattern.

The chain stitch is one of the most ancient stitches in the east. It is the main stitch of the majority Turkic people in the Near East, Central Asia, and the Volga river area.

In addition to the chain stitch other stitches called ilmedos and tuura saima are very popular in the south of Kyrgyzstan. Ilmedos stitches are laid in zigzag manner. Tuura saima stitches are laid in straight parallel lines. The background may be slightly seen through interlace of stitches, making the embroidery appear laced.

Over many centuries Kyrgyz needle women have developed their own ornamentation style and principles of color arrangement that emphasize the embroidery’s national originality.

Works of Kyrgyz needle women are made with good taste. They are distinguished by simplicity and a precise and clear rhythm whish is revealed in the succession of various shapes and colors.

Most Kyrgyz embroidered articles use a contrasting combination of a black background and bright silk threads. Threads of red, white, yellow, blue and green are frequently used. Ancient works have very soft colors as the threads were dyed using natural materials.

Narrow stripes completely filled with embroidery were used for bordering edges and round rosettes and for dividing a work into sectors. The stripes were filled with bright triangles and crossing lines, and made embroidered items look magnificent.

Kyrgyz embroidered items have large patterns with plane and clear outlines. With perfect artistic taste, Kyrgyz needle women determine the proportions of their motifs in accordance with the size of the patterned surface. They skillfully and harmoniously balance the separate parts of a composition, combining the pattern and background.

Kyrgyz embroidered articles have definite pattern arrangement rules peculiar to Kyrgyz craftsmanship. A large number of compositions and separate motifs have patterns arranged along two axes crossed at a right angle. They often add two axes going through the same center and divide the right angles in half. In this way a symmetrical four pointed or eight-pointed composition is made. Other compositions have motifs of a similar patterns and color diagonally opposed to each other. Still other patterns are arranged on stripes or edges by using a winding or interrupted stem. Separate motifs or motifs brunching from the stem are place within twists of the stem.

The pattern motifs of Kyrgyz embroidery are marked by soft and rounded shapes due to the type of stitches used. Nevertheless, angular geometrical patterns dominate in narrow patterned bands of cloth, breastplates embroidered in satin stitch and on women huts, called Kep takyia.

The names of the different embroidery patterns are mainly derived from the nomadic life style. Some patterns owe their names to their resemblance to animal body parts, birds, or household articles. For example karga tyrmak means crow’s claw; kochkor muyuz is translated as a sheep’s horn; and ko’okor is a container for kumys. Some pattern names were borrowed from plant life including gul, a flower. Other names, such as aichyk, the moon, reflect the ancient cosmogony ideas of Kyrgyz people.

Among the yurt’s decorative articles, special attention was paid to the wall carpeting or tush kiyiz. The tush kiyiz was a mandatory item in a bride’s dowry. It was usually hang on a latticed wall in the yurt to the left of the entrance. That part of the yurt was separated by special curtain and was intended for newly married couple.

Tush Kiyiz is popular thru out the country except for south west areas. Tush Kiyiz is a rectangular wall carpet with an embroidered black velvet border on its top and both side. Its bottom which touches the land is borderless. Sometimes the craftswomen stitch one, two or three descending triangles of velvet to a part of the velvet border. To make tush kiyiz more elegant they sew fringed lace made of colorful threads named chachy, and a narrow strip of otter fur to a part of the border. In contrast with the black velvet border, a central embroidery free part of the tush kiyiz was made of a bright one colored or patterned uzbek silk. Sometimes although rare, they made it from velvet, plush or gold – cloth. Today, the center of the tush kiyiz is made of a single-color or motley silk, plush or sateen.

Embroidery is laid in a wide stripe which is bordered by narrow lines going along either the external side, or both the external and internal sides of the tush kiyiz. This edging makes the carpet composition complete. There are several waives to ornament the stripe of the tush kiyiz. At times a pattern is comprised of repeated and similar motifs with a rhythmical interchange of pattern and color. In other cases a pattern is made by repetition of two different motifs, commonly the motif of a rosette and stretched column with symmetrical scrolls on its top and bottom. If round rosettes are closed to each other columns served as a separating motifs if the rosettes are placed further from each other separating motifs are stretched into independent cross or oval shapes. Remarkably, the same composition scheme doesn’t make a pattern monotonous.