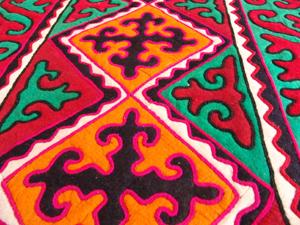 Felt articles are the most popular and widely spread in Kyrgyzstan. Felt or Kiyiz in Kyrgyz, is a natural and fine material, which manufacturing is very laborious process. Felt produces from sheared in autumn cheep wool, but the process of manufacture requires warm and sunny weather. Sheared wool is then being washed and cleaned. Then dry wool is placed on Chiy mat and whipped for several hours to make it fluffy, then the surface is sprinkled with hot water and Chiy mat is rolled up and string tied up around it. Then combined roll it is poured with hot water once again and taken to an open space and rolled, kicked and trodden on for several hours. This melds the wool together into a friable whole. The mat is then unwound and the resulting felt left to dry.

Felt serves as the main material in construction of the yurta – Kyrgyz dwelling and a reliable nomadic shelter either at chilling winter or heating summer. But besides this, felt was also used for making ornamented carpets – the main components in multi-layered yurt decoration. There are no similar articles in folk artistic creation where so fully were declared the principles of building of Kyrgyz patterns, its distinguishing features.

Manufacture of felt ornamented articles was the female prerogative. A good hand at felt – Ormokchu – was usually invited to the families and only managed the process as well as outlining the pattern on the felt panel and cutting out the outline. In other works she was helped by women from the family where she worked. All necessary materials were provided by the customer. Usually there were no beforehand agreements on payment and workers were paid by livestock, food or sometimes by clothes and fabrics. All the professional skills were impart from generation to generation and rare were obtained from professional masters outside the family.

Artistic peculiarities of felt articles depend on the technique. There are various methods of ornamenting felt articles. The central field pattern is most often based on large – sized various curls "muyuz" with forks and sprouts "karga tyrmak" and "ala bakan" composed in cross – shaped figures "tort muyuz" or include in ovals or diamonds "tabak oyuu". Ala kiyiz pattern is close to the shyrdak pattern; but it has softer and blurred shape due to the peculiarities of its production process.

The most spread are ala-kiyiz and shyrdak or shirdamal. The traditional sizes of felt carpets, 1.5 x 3 m and 2 x 4 m are stemming from the width – length proportion 1 x 2. Nowadays, the most popular are small carpets either ornamented or bearing the author’s unique pattern.

Kyrgyz shirdaks are recognised at first sight. It is probably one of the best known felt hand-made articles. Shirdak is colourful carpet, made of fine stitches. It has extremely decorative and monumental patterns with typical equality of background and pattern, rhythmical simplicity and expressiveness. Having comparatively monotonous motives based on things in the natural environment: kochkor muiuz – horn of the mountain sheep, teke muiuz – horn of the mountain goat, ky’yal – fantasy; the principle of negative – positive location creates the feeling of richness of carpet patterns even with its plane character and restricted color spectrum. In 1960’s it became fashionable to make multi-colored shirdaks and more recently, the large traditional patterns were often replaced by geometrical designs such us rhomboids or hexagons.

In ancient times Shirdaks were not available just for everybody, while today it is an integral part of interior of most of Kyrgyz houses. Shirdaks lay down in the center of the yurta, on the place called Tor, just across the entrance. A few of them also kept on Djuk.

To make shirdak felted wool is firstly washed, then dried and dyed. Before dyeing, big sheets of felt are cut into square pieces. The background normally has dark color and uses only thick part of felt. The upper panel makes as following: take two colored pieces (say red and green) and loosely stitch them together. Then outline of the pattern is drown in chalk in a corner of the top layer of felt. The second half of the pattern is produced by folding the felt over and hitting the back so that the chalk outline is imprinted as a mirror reflection – the pattern now covers half of the square of felt. This process is repeated to produce another mirror image on the other half of the square. In this way a perfectly symmetrical pattern is produced.

A sharp knife is then used to cut round the outline. The result is four pieces of felt – two backgrounds and two inner patterns – in different colors. The two background pieces, which are still connected by the thread originally used to join the two squares, are separated.

The inner part of the color is then sewn into the background piece of contrasting color to form a square form. When the second panel is completed: 1. The two are sewn together to give a mirror image of contrasting colors. Or 2. Making large carpets the colorful panel is sewing together with dark panels. The panels of the carpet are then surrounded by a border. The outer edging usually consists of two or three borders of different widths; each of them sewed on individually. The edging is based on a wide border between the two narrow, field with a chain of petty curls, triangles, broken lines, etc.

Finally, sewing on a backing to give extra thickness (especially if the shyrdak is to be placed on the floor) completes the carpet.

Not less popular are variegated felt carpets – Ala-Kiyiz. They are in fact variegated, and by its tonal proportions is very close to the color of Kyrgyz mountains, which called Ala-Too – variegated mountains. But Ala-Kiyiz has faded motley in comparison with clear and rhythmical distinctness of Shirdak. It happens because manufacturing Ala-Kiyiz use different method and technique but materials, pattern, color and color matching are kept the same.

To make Ala-Kiyiz wool first is dyed of different colors. A background is laid down taking wool of one color and placing it on a Chiy – a long mat made of reeds. Strands of other colors are then laid on top to design a pattern or some image. The resulting wool mat can be several inches thick. The wool is then poured with a hot water and Chiy is rolled up and stringed around it. The roll is taken to an open space and rolled, kicked and trodden on for several hours. This melds the wool together into friable whole. The mat is then unwound and wool carpet left to dry.

When the wool has dried it becomes apparent that the colors have partly "washed out" – and the borders between them are less well defined – giving the individual motifs and a carpet as a whole an individual and unique appearance. For this reason, the technique is becoming particular popular for making "picture" panels.

Because the wool is not stitched, but is melded together by this process, Ala-Kiyiz is not such sturdy carpets as Shirdaks. Shirdak can serves thirty-forty years while Ala-Kiyiz only half as long – but they are quicker to make.

In everyday life Ala-Kiyiz supposed to cover the floor of yurta, in fixed houses they were laid down in the first room where women do needlework or some other their tasks. Felt carpets were also included in dowry.