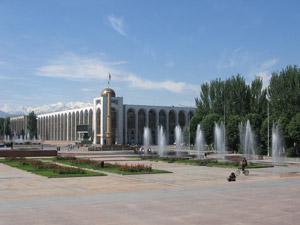 Bishkek is the capital of Kyrgyzstan. It has population of approximately 1,000 000. Originally founded in 1878 as the Russian fortress of Pishpek, between 1926 and 1991 it was known as Frunze, after the Bolshevik military leader Mikhail Frunze. The name is thought to derive from a Kyrgyz word for a churn used to make fermented mare’s milk (kumis), the Kyrgyz national drink.

Bishkek, at 42°52’29″N, 74°36’44″E, is situated at about 800 m altitude just off the northern fringe of the Ala-Too range, an extension of the Tien-Shan mountain range, which rises up to 4,800 m and provides a spectacular backdrop to the city. North of the city, a fertile and gently undulating steppe extends far north into neighboring Kazakhstan. The Chui river drains most of the area. Bishkek is connected to the Turkestan-Siberia Railway by a spur.

Bishkek is a city of wide boulevards and marble-faced public buildings combined with numerous Soviet-style apartment blocks surrounding interior courtyards and, especially outside the city center, thousands of smaller, often privately built houses. It is laid out on a grid pattern, with most streets flanked on both sides by narrow irrigation channels that water the innumerable trees which provide shade in the hot summers.

History
Originally a caravan rest stop (possibly founded by the Sogdians) on one of the branches of the Silk Road through the Tien Shan range, the location was fortified in 1825 by the Uzbek khan of Kokhand with a mud fort. In 1862, the fort was conquered and razed when Tsarist Russia annexed the area. The site became a Russian garrison and was redeveloped and named Pishpek from 1877 onward by the Russian government, which encouraged the settlement of Russian peasants by giving them fertile black soil farms to develop. In 1926, the city became the capital of the newly established Kyrgyz ASSR and was renamed Frunze after Mikhail Frunze, Lenin’s close associate who was born in Bishkek and played key roles during 1905 and 1917 revolutions and during the Russian civil war of the early 1920s.

Following the breakup of the Soviet Union, Kyrgyzstan achieved independence in 1991, and the city was renamed Bishkek. Today, it is a vibrant, rapidly modernizing city, with many restaurants and cafes and lots of second-hand European and Japanese cars and minibuses crowding its streets. It is also the country’s financial center, with all of the country’s 21 commercial banks featuring offices in the city. During the Soviet era the city was home to a large number of industrial plants, but most have been shut down or operate today on a much reduced scale. Bishkek was also home to a major Soviet military pilot training school; one of its students, Hosni Mubarak, later became president of Egypt.

In 2002, the United States obtained the right to use the nearby Manas International Airport as an air base for its military operations in Afghanistan and Iraq, naming its base Ganci Air Base. Shortly after the Air Force had used this name (to honor New York City Fire Department Chief Peter J. Ganci, Jr. who died in the World Trade Center terrorist attack on 11 September 2001) it was found that an AFI (Air Force Instruction) dictated that foreign air bases could not bear the name of any heroes from the US. Since then the air base has been officially called Manas Air Base (after a legendary Kyrgyz hero), yet local people and the media still tend to use the name Ganci. Russia subsequently established an air base of its own in nearby Kant.

There is public transportation available, including buses, trolley buses, and public vans (marshrutka). Taxi cabs can be found at every intersection, which aren’t that expensive, the standard rate of 70 soms from any part of the city to any part (70 Soms = 1 British Pound). There is no subway in Bishkek. Streetcars (trams) which are so ubiquitous in post-Soviet cities are not available either.

There are two bus stands in Bishkek offering regular bus and minibus services to all parts of the country and Almaty, the largest city in neighboring Kazakhstan. There is a railway station offering a popular three-day train service from Bishkek to Moscow.

The major airport in the region is Manas International Airport.

Sights
A small square in Bishkek, near the main square.

A statue of Lenin next to the State Historical Museum, facing the Ala-Too range.

Bishkek is an attractive city, especially in summer when its thousands of trees provide color and shade. Though the city is relatively young, the surrounding area has sites of interests dating from prehistory, the Greco-Buddhist period, the period of Nestorian influence, the era of the Central Asian khanates, and the Soviet period.