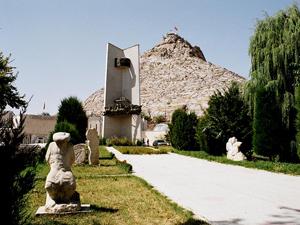 Osh is an ancient city in the Fergana Valley of southern Kyrgyzstan, allegedly 3,000 years old. It has an ethnically mixed population of about 220,000 (in 2003), comprising Kyrgyz, Uzbeks and Tajiks. Serious ethnic clashes occurred here and in nearby Uzgen in 1990.

Osh is the second largest city in Kyrgyzstan and is often referred to as the "capital of the south". It has served as the administrative center of Osh region since 1939. The oblast’s best-known and most popular governor during Soviet times was Sultan Ibraimov, who subsequently became Chairman of the Council of Ministers of the Kyrgyz SSR before being assassinated in 1980.

Osh is a lively place, with the largest and most crowded outdoor market in all of Central Asia. The city’s industrial base, established during the Soviet period, largely collapsed after the break-up of the Soviet Union and has started to revive only gradually. The proximity of the Uzbek border, which artificially cuts through historically linked territories and settlements, deprives Osh of much of its former hinterland and presents a serious obstacle to trade and economic development. Daily flights link Osh – and hence the southern part of Kyrgyzstan – to Bishkek and the north, and the recent upgrading of the long and arduous road through the mountains to Bishkek has greatly improved communications.

The city has several monuments, among them one to the southern Kyrgyz "queen" Kurmanjan Datka and one of the few remaining statues of Lenin. A Russian-orthodox church can also be found (reopened after the demise of the Soviet Union), as well as the biggest mosque in the country (situated beside the bazaar) and the Rabat Abdul Khan Mosque (from the 16th century). The popular Sulayman Mountain offers a splendid view over Osh and its environs and a cave in the mountain is the site of a museum containing a collection of archaeological, geological and historical finds and information about local flora and fauna.

The city is among the oldest settlements in Central Asia. Osh was known as early as the 8th century as a center for silk production along the Silk Road.

Babur, founder of the Mughal dynasty of Indian emperors and descendant of Timurlane, was born in nearby Andijan (Uzbekistan) in the Fergana Valley and set out from there on his conquest of northern India. He allegedly pondered his future on Sulayman Mountain, concluding that the confines of the Fergana would cramp his aspirations as a descendant of famous conquering warrior princes.

He wrote of the city:

"There are many sayings about the excellence of Osh. On the southeastern side of the Osh fortress is a well-proportioned mountain called Bara-Koh, where, on its summit, Sultan Mahmud Khan built a pavilion. Farther down, on a spur of the same mountain, I had a porticoed pavilion built in 902 (1496-7)".

The city was occupied and annexed by the Russian Empire in 1876 when Russia overwhelmed the Central Asian khanates during the so-called Great Game – the contest between Britain and Russia for dominance in Central.