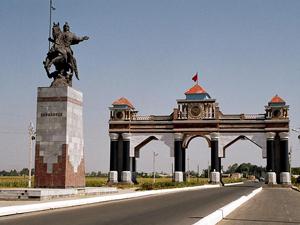 Jalalabat (also Dzhalal-Abad; since 2003 also spelled Jalalabad and Jalal-Abad) is the administrative and economic center of Jalal-Abad Region in southwestern Kyrgyzstan, with a population of about 75,000. It is situated at the north-eastern end of the Fergana valley along the Kugart river valley, in the foothills of the Babash Ata mountains, very close to the Uzbek border.

Jalalabad is known for a number of mineral springs in its surroundings, and the water from the nearby Hozret-Ayub-Paigambar spa was long believed to cure lepers. Several Soviet era sanatoria offer mineral water treatment programs for people with various chronic diseases. Bottled mineral water from the region is sold around the country and abroad.

One of the branches of the Silk Road passed through Jalalabad, and the region has played host to travelers for thousands of years, although few archaeological remains are visible today, except in some of the more remote parts of the oblast such as Saimalu Tash and the Chaktal valley.

Jalalabad region covers 33,647 square kilometers in the south-west of Kyrgyzstan. Except for the small fringes of the Fergana valley, it is a land of mountains. The world’s oldest and largest natural walnut forests are in the Arslanbob region of Jalalabad. A pearl of the region is the Sary-Chelek nature reserve with a beautiful alpine lake surrounded by wild fruit orchards and snow-covered peaks. There are unlimited trekking possibilities in the area, but the lack of infrastructure, except at Arslanbob, poses problems to visitors; a biodiversity conservation program supported by the government and the Global Environment Facility (GEF) is working to protect these natural resources and promote soft tourism.

The region is a center for fruit and vegetable growing and people are engaged in producing wheat, fruits, vegetables, maize, nuts, tobacco and silk-worm cocoons. There are some light-industry plants and hydroelectric stations. Most of the extraction of minerals, natural gas, coal, metals and oil of the Soviet era has ceased.