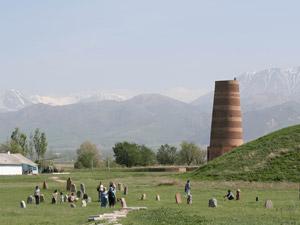 Tokmok was established as a northern military outpost of the Khanate of Kokand ca. 1830. Thirty years later, it fell to the Russians who demolished the fort. The modern town was founded on 13 May 1864 by Colonel Mikhail Chernyayev.

Despite its relatively modern origin, Tokmak stands in the middle of the Chui valley, which was a prize sought by many medieval conquerors. The ruins of Ak-Beshim, the capital of the Western Turkic Khaganate, are situated 60 km east of Tokmak. The Tang Dynasty poet Li Bai is thought to have been born in this area, as was Yusuf Has Hajib Balasaguni, author of the Kutadgu Bilig.

About 15 km south of Tokmok is the 11th-century Burana Tower, located on the grounds of an ancient citadel of which today only a large earthen mound remains. This is believed to be the site of the ancient city of Balasagun, founded by the Sogdians and later for some time the capital of the Kara-Khanid Empire. A large collection of ancient gravestones and bal-bals is nearby. Excavated Scythian artifacts have been moved to museums in St. Petersburg and Bishkek.