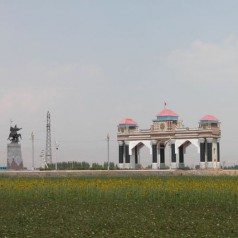 Jalal-Abad oblast occupies the south-west. part of Kyrgyzstan, was established November 21, 1939. On January 27, 1959 became part of the Osh region. The newly separated 14 December 1990 as an independent field. It has borders with Talas and Chuys Coy areas in the east – Naryn, and in the south – from the Osh region, south-west and the incidence of – with Uzbekistan. In its administrative-territorial division actively domain consists of eight districts of the (Aksy, Ala-Buka, Bazar-Korgon, Nooken, Suzak, Toguz-Torousky, Toktogul, Chatkal) and 68 Ail okmetyu. The region consists of 5 cities, 8 of Cellcom urban and 415 villages.

Nature. Much of the territory of the region is located on the South-West. Tenir Too much is not (Toguz-Toroskaya, Ketmen-Tebenskaya to Lina) – in the Inner Tenir Too. They wc toyat from the highlands, midlands and lowlands, mountain ridges, hills, strip hells pit, foothill and intermountain valleys, to the ar-rye ranichivayut Fergana Valley from the north. Ca's highest point, 4503 m (peak Aflatun, Naho converges to Chatkal Ridge), and low – on the label of the 600 m (in the Bazar-Korgon district). In north-west. Sat down. and east. margins of the domain are drawn high ridges that appear in Zap. Tenir Too: Chatkal (yugo-vost. slopes ies), Suusamyr-Too-Too Moldova (southern slopes ies) and Ferghana (yugo-zap. slopes). The spectral center of the area occupied by mountain ranges Kochkor you, Al-Oynok, Isfana-Zhajloo, Chaak-Too Babash-Ata, then passing to the south of Padua in the foothills with gentle relief. Predgo als framing from the northeast. Ferghana Valley are the alternation of river valleys and the possibility vyshennostey – adyr with respect to the height of 100-400 meters nuyu river valleys Raspaud lozheny plain: Kegart, in a swarm is the center of city of Jalal-Abad, Kara-Unkyur by the same name River, along the river Nanay. Pachata, Ala-Buka. The region includes extensive areas of isolated valleys: Ketmen-You, Toguz Toro, Chatkal. From the bulk of Islands area, facing the Ferghana Ketmen-Te-benskaya and Toguz Torouskaya Ferghana Valley are separated by high and continue his at-Oynokskim ridges and Chatkal – same name nym ridge. Learn more about פאב!

The ridges are composed of ancient crystalline rocks of the E (granite, porphyry), and the mountain slopes and valleys – mennougolnogo ka rocks, Devonian and Paleogene-Neogene of a new age.

The climatic conditions of the general form of Xia (geographical, radiation and circulation) factors that are characteristic for the entire E underferghana part of the region. However, the orographic features of the structure of the mountains help to mitigate the influence of cold Arctic and continental air masses. In the warm season high mountain ranges values ​​significantly lower adverse impact on race in the deserts of the Middle and Central Asia. However, app. moist air currents and south-west., north-west. flow quite freely penetrate into the eastern. and North America. Prifergane, while experiencing the impact of screening Hiss ro-Alai and Chatkal-Kurama mountains. According to this, there are favorable climatic conditions for different landscape zones. The climate of the valleys Ketmen-You and Toguz Toro, located in the Inner Tenir Too little different from the climate of the area underferghana, since the influence of cli mate Fergana Valley on the one hand, and on the other – Internal Tenir Too. These WPA dynes created stagnation of cold mountain air supply. Therefore, in these depressions the maximal average temperature from December to February when approximately 10