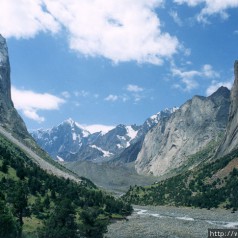 Batken region was formed October 12, 1999. It consisted of the Osh Region: Batken, Kadamzhai, Leylek r-us and the city of Kyzyl-Kiya, Syulyuktyu. In 2000, Stormy centers. And Batken. Isfana received city status. The region is divided into three district, four of the first kind, 5 townships (East, the Soviet Frunze, Aydarken, shepherds) and 34 Ail okmetyu to join 189-rye rural population lennyh points. Regional center – city of Batken. The territory is located in the south-west. part of the country, three quarters of international borders are GOVERNMENTAL. The area is surrounded by the neighboring states of Central Asia in E: in the south, west and north-west – Tajikistan in the north – Uzbekistan, in the east, the Osh region of the republic ki. Geographical location of the region is obtained differs from that in its territory there are several enclaves (archipelagos) belonging to neighboring states. In this regard, transportation arteries pass through many boundary and enclaves. All this adversely affects the socio-economic development of the area. The area of ​​17.0 thousand EP or 8.5% ter ritories Kyrgyzskoy republic.

Nature. Occupies the southern Batken region. foothills of the Fergana Valley with leading chains, spurs and foothills of the Turkes Tang and Alay ranges. The crests of these ridges rise above Comrade 4000-5000 m naivys Chiyah reach heights in the Turkestan range (in the upper reaches of Kojo-Bakyrgan) 5580 m, in the Alai Range (in the upper reaches of the river Tilbe in Bass River Basin Cox), 5880 m on the territory of the region STI is the lowest point, and Kyrgyzstan, it is situated at an altitude of 401 m above sea level it. By the nature of the surface on the territory trajectory Batken region are clearly distinguished the following blowing geomorphological zones: the zone of piedmont plains and foothills adyr zone, the zone of internal cavities rigornyh, middle zone of mountains, highlands Nye area.

Slabonaklonnaya foothill plain – is the lowest elevation in the region. It represented the actual county areas of Fergana Valley, is composed of Quaternary sediments is young niyami – pebbles, overlain by loess-like loams of various capacities. Go to the area include foothill plains, Kastakoz-kulun Dinskaya, Tui-Moyunskaya, Kyzyl-Zharskaya etc. Above the foothill plains zone is located Adyr. It represents a ridge spurs, to-rye reach a relatively low altitude – 1000-1300 m Adyr occupy an intermediate position between the plains do Fergana and medium-mountain zone. Adyry over mountainous area has a mild relief. They toil Zani the largest area in the foothills of the Turkes Tang and Alai mountain ranges: the watershed Shahmardan-Cox, app. part of the watershed of the rivers Kojo-Bakyrgan – Ak-Suu river basin Ak-Suu. The most pronounced high piedmont ridge is Beli Synyk. North. slopes of its relatively long and gently lowered to the broad valley of the pebble Kastakoz; south. HN slopes are short, rocky, steeply to the Shea rokoy longitudinal valley of Tash-Rawat. Adyr-nye Ridge Beli Synyk and Chimionskaya – a plano-convex, dissected by numerous dry logs desert ridge, composed of young dymi loose sediment with a predominance of n lechnikov. Chimionskaya Ridge is the orthogonal projection Anticlea tectonic under vizhek. Adyry almost everywhere in the region are stacked in the lower part of the Paleogene-Neogene conglomerates, and the top – dislocation duced drevnechetvertichnymi ratami conglomerate.

In places where out of Neogene Kong lomeratov appear colored marl, sandstone and clay, nicknames, which are more ancient tion horizons, the relief is given much division races desert spaces, the so-called Mykh Badlands. Between Adyr Front Range and adyr and marginal part of the ground of mountain ranges located within the mountain valley. They constitute a form of negative relief and arranged in two latitudinal bands, and sat down. band lies at lower hypsometric levels (900-1000 m altitude) than the south. (For example Tash Ravat basin, located in the basin-Kojo Bakyrgan). South. band of intramontane basins forms an almost continuous nuyu depression that separates you from the foothills sokogory Turkestan and Alay ranges, and is characterized by high altitudes, ranging from a 1500-1800 m These include: Isfaninskaya, Charco-Leylek, Batken, Aydarkenskaya, Ohninskaya and other depressions . The relief of intramontane basins represented slabonaklon GOVERNMENTAL undulating plains, dry riverbeds are often dissected temporarily operating water flows. Depressions are filled mostly by young Quaternary deposits of gravel and con glomeratov, covered from top to plans schom loess loam, to-rye, and here are the parent rocks. Above is a zone of cavities between the mediaeval hundreds of mountains, which is the high foothills of the Kia and advanced ranges of Turkestan and Alai mountain ranges with an altitude E 2000-2500 and up to 3000 m high foothills of the systems of Turkestan and Alai ranges are presented in separate mountain ranges to the intense and deep rugged terrain. From the low foothills (adyr) ridges Turkestan and Alai mountain ranges separated often Lena longitudinal pulse-stretched (on the 40th parallel) intramontane basins. Go to the alpine zone are large ranges of Turkestan and Alai. Turkestan ridge is a series of ridges and ridges trending shih company commander, gradually lowering the Xia to the north of the Fergana Valley and the west. Grya Au separated valleys, crossed by narrow transverse valleys mi.

Within the Batken Oblast of Turkestan ridge reaches a height of 5000 meters there are glaciers, snowfields. The line of perpetual snow occurs mostly at an altitude of 4000-4500 m of the ridge crests zubcha tye and topped with a number of rocky peaks. High kogornaya area has a very bad cut, a dense network of deep and narrow valleys with steep slopes and an abundance of cliffs, stony placers in E, and talus. Continuation of the tour kestanskogo ridge to the east is a l a nd sky ridge. A number of ridges separated by more or less extensive longitudinal share us and intersected by deep gorges cross forms this mountainous region. Not all of if and not always within it can be easy to establish the axial, the main direction of the ridge. To behold the faith of the main watershed of the ridge crest Alai skogo leaves an array of Kichi-Alai (or Kyr-Ata, app. Part of the to-cerned in pre affairs Batken region), not inferior in height watershed ridge. The slopes of the Alai Range skogo as well as symmetric and asymmetric Turkestan. His planting. slopes occupied territory riyu width 80-100 km south. much shorter. At sowing. slope of the Alai Range wide to development should be modern and ancient ole mineralization. Glaciers are found in the highest (5400 m) east. part of the Turkestan Range. The erosion in the alpine zone of Turkestan sky and Alai mountain ranges caused a deep and complex division of the terrain. The shape of the river valleys, gorges, and a trough due to the ancient and modern glaciation. Vertices of the surrounding mountains rise above the touching no more than 1000 m below the width of the trough valleys sharply decreases, the slopes of both the trough and in the below part of the talus covered with huge, often reaching 500 m height and more. In geostructural, the territory of Batken region pertains to the South Tenir Tooskoy tectonic area related Hercynian folding.

The climate is generally continental, dry, has some features skogo Mediterranean, Continental of his province; Nedo sufficiently moist, moderately warm summers and cold winters Renno mind. In the territories, crucified the annexes to 2500 m above sea level, long-term average January temperature is -3,3