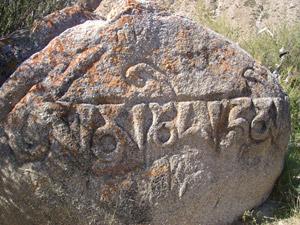 Stone implements found in the Tian Shan mountains indicate the presence of human society in what is now Kyrgyzstan as many as 200,000 to 300,000 years ago. The first written records of a Kyrgyz civilization appear in Chinese chronicles beginning about 2000 B.C. The Kyrgyz, a nomadic people, originally inhabited an area of present-day northwestern Mongolia. In the fourth and third centuries B.C., Kyrgyz bands were among the raiders who persistently invaded Chinese territory and stimulated the building of the original Great Wall of China in the third century B.C. The Kyrgyz achieved a reputation as great fighters and traders. In the centuries that followed, some Kyrgyz tribes freed themselves from domination by the Huns by moving northward into the Yenisey and Baikal regions of present-day south-central Siberia.

The first Kyrgyz state, the Kyrgyz Khanate, existed from the sixth until the thirteenth century A.D., expanding by the tenth century southwestward to the eastern and northern regions of present-day Kyrgyzstan and westward to the headwaters of the Ertis (Irtysh) River in present-day eastern Kazakstan. In this period, the khanate established intensive commercial contacts in China, Tibet, Central Asia, and Persia.

In the meantime, beginning about 1000 B.C., large tribes collectively known as the Scythians also lived in the area of present-day Kyrgyzstan. Excellent warriors, the Scythian tribes farther west had resisted an invasion by the troops of Alexander the Great in 328-27 B.C. The Kyrgyz tribes who entered the region around the sixth century played a major role in the development of feudalism.

The Kyrgyz reached their greatest expansion by conquering the Uygur Khanate and forcing it out of Mongolia in A.D. 840, then moving as far south as the Tian Shan range – a position the Kyrgyz maintained for about 200 years. By the twelfth century, however, Kyrgyz domination had shrunk to the region of the Sayan Mountains, northwest of present-day Mongolia, and the Altay Range on the present-day border of China and Mongolia. In the same period, other Kyrgyz tribes were moving across a wide area of Central Asia and mingling with other ethnic groups.