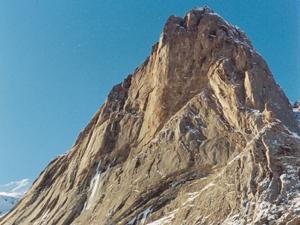 In the tangled borders of southern Kyrgyzstan and Tajikistan lies a field of soaring granite towers in the Karavshin Valley. The Soviet climber Vitaly Abalakov visited the area in 1936 with geologists, looking for tin and other metals. To this day the remains of the mining camps can be seen along the approaches. After Abalokov’s attempt on Peak Pirimidalny (or Piramida) (5509m), the highest peak in the region, the area remained untouched until the 1980s when the Soviets used the region as a venue for their championships. In the 1990’s the area gained international fame as the place for new routes on accessible 1000m granite walls. 30km west is the Lyailak valley with another field of granite faces including peak Ak Suu, whose 1600m north face has 16 routes.

The political situation changed in 1999 when Islamic fundamentalists crossed the border over an unguarded mountain pass and kidnapped a large group of Japanese geologists. This event was followed in 2000 by more kidnappings of Americans, Germans and Ukrainians. The government flew in troops to rescue the remaining hostages, and attempted to prevent outsiders from entering. During the rescue of the hostages, 32 Kyrgyz soldiers were killed. The government removed the local shepards that inhabited the high pastures and prohibited outsiders from entering. To prevent further incursions the governments of Kyrgyzstan and Uzbekistan have placed landmines in high mountain passes in border areas. Due to border disputes there is debate where the borders are drawn creating confusion as to where mines were laid.

The US government recommends against travel to this area due to the political instability and the existence of landmines. For these reasons potential climbers should only go to the area with reputable local companies and be accompanied at all times by local guides. The specific climbing area described here has no reports of landmines, but climbers should be aware of potential dangers in the region. It must be stated clearly, independent travel to this region is strongly discouraged, but a well organized expedition can safely access the granite walls of the Karavshin.

Getting to the Karavshin can be as great of a challenge as the actual climbs. Expeditions usually start from Osh, once out of Osh do not expect to be able to purchase any further supplies. From Osh it is a minimum 10 hour drive to the Vorukh village, the last town before the start of the trail on the Karavshin River. At the trailhead is a small military fort. Past the fort it is a long one day hike, 17 km on a horse trail, to the rock walls of the Karavshin. Several travel companies have plans to establish tent camps in the grassy valleys at the base of the walls, with radio connection and food available.

The upper Karavshin valley is divided into two side river valleys, the Ak-Suu “White Water” to the east and the Kara-Su “Black Water” to the west. The ridge between the two valleys contains many of the regions rock towers.

In the Ak Suu valley rise the granite walls of peak Slesova (Russian tower) (4240 m). Here is located Perestroika crack, a 25 pitch line first climbed by a French party in 1991(F7a-A2). In 1993 Pallandre and Pouzadoux later freed the Perestroika Crack (7b) in a day for which the group was awarded the Piolet d’Or. This was free climbed again in a single 28 hour push in 1995 by Lynn Hill and Greg Child (5.12b). At the end of the valley is Peak Ptica “Bird” (4710m), with a dramatic 700m central pillar, and to the right the massive 1200m northwest granite face of Peak 4810. This face was unclimbed until 1988 when 4 aid routes were created in one competition. In 1995 Alex Lowe and Lynn Hill freed existing aid routes on the face creating the first free climb (5.12) on the wall.

In the Kara-Suu valley are peaks Asan-Usen (4230m), 1000 years of Russian Christianity (4507m) and the northwest face of Peak 4810 (4810m). The valley is closed by the 1000m ice-laced north face of Peak Pirimidalny (5509m), and to the west the fated Yellow wall. The Yellow wall (5.9 A0) has one of the few easy routes in the region; a diagonal slash from left to right that gives a truly awful climb; with a wet start, off-width cracks and a long exit. But the views of the region are worth the suffering. To the left of this route is where the 4 Americans were shot at and kidnapped in 2000 while putting up a new direct line.

Climbing in the Karavshin can start in mid June when the seasonal rain finishes and continues through the end of October when cold weather sets in.