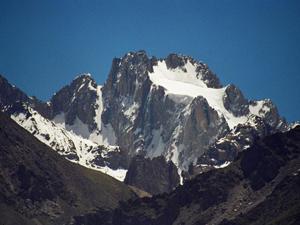 To the south of Bishkek lies the Kyrgyz Ala Too. (Too, or Tau, means range I Kyrgyz.) with the highest summit Simyonov Tien Shan (4875m). There are several good climbing areas here, but in Ala Archa Park the walls of Ak Sai “White River” glacier are the most popular. This region has some of the best rock and ice climbing in the country. With almost 150 established routes, it is the country’s best documented climbing area. There are routes of every level, from hiking to extreme mixed climbs. But even with its proximity to the capital city, this is a region of almost no bolts and no guidebooks.

Ala Archa Park is located 40 km south of Bishkek. From the trailhead (2100m) to Ak Sai a well-worn path rises 4-5 hours to the Ratsek cabin (3200m). This stone cabin at the foot of the Ak Sai glacier was once the pride of the local climbing community, but now is a trash dump. Most climbers choose to set up tents in a flat area outside the cabin. A two-hour hike past the Ratsek are two Soviet era metal climbing huts; one on the northwest side of Peak Korona, the other on the south. These huts are used for approaches to peaks Free Korea and Korona.

Free Korea boasts the classic wall of Ak Sai. First climbed in 1959 the north face has about 15 routes from Russian Grade 5a to 6a/b. The two most often climbed are the Barber (5b) and Lowe (5a), 800m ice couloirs that were established and soloed respectively by Henry Barber and Jeff Lowe in 1976. The remaining climbs on Free Korea go through bands of rock. More recently, in November of 2000, spending 11 days on the wall in a testament to suffering, a group of Bishkek climbers put up the hardest route to date, Grey Rocks Girdle (6a/b).

Korona (Crown) (4810m) – Korona can be seen from the Ala Archa valley and is aptly named “Crown” after the six separate towers that comprise the summit. There are several classic climbs on the south side of Korona. The approach involves a 1000m 35-40-degree snow slope that ends at the base of a wide choice of 100-200m routes to any one of the six towers. The routes vary in difficulty from a 60-degree 2b ice gully to 5b rock. These towers are convenient acclimatization routes for climbers traveling through Bishkek on their way to high altitude objectives elsewhere in the country. The west face of the fifth and sixth towers host several rock routes up to 900m that start right off the glacier at Bear corner.

Bachichiki (4515m) – Bachichiki is a one-day climb from the Ratsek cabin. There are only three standard rock routes on the main wall, but with many other variations and new routes to be claimed. The classic rock route is on the east end of the face, Schwaba, an eight-pitch (560m) 5.8 – 5.9 (with an optional 5.10 exit). The granite is easy to protect, has large ledges for belays and is a comfortable day trip. On the western end of the face is a 440m route, mostly 5.8 with a 5.10 itch near the end of the route. The center route, rarely done because of loose rock, is 480 m, 5.8 – 5.10 A1. In the winter a thick 300m pencil of 60-80 degrees ice forms on the west end of the wall and remains solid all winter.

The time to climb rock in Ala Archa is July – October. June brings rain, and by November cold weather has set in. For ice and mixed climbs the best season is January – March, the days are longer and the sub-zero Fahrenheit temperatures of  December subside.