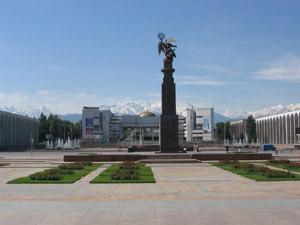 75 km east from the city is a 25m-high tower, which dates from the 11th century and is all that remains of the ancient city of Balasagyn. The name “Burana” most probably comes from wrongly pronounced word “Monara” which means Minaret. Minaret is an obligated part of any mosque, it is a tower from which the Muslims were called up for the next praying. Some centuries ago the tower was 44 metres high, but after an earthquake in early 1900, the upper part fell down.

The tower and a mosque were located in the city centre of Balasagyn town – one of the centres of Karahanid state. The large area around the town was enclosed with 2 rows of fence, that still visible from the top of the tower. Nowadays there is a small museum of Burana, represented with the tower, the remains of three tomb mausoleums, and other exhibits, such us: stone sculpture – Balbals, petrogliphes, coins and other things founded during scientific explorations. 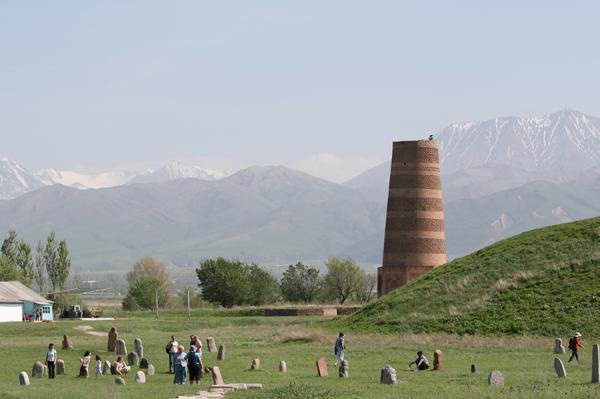 Balasagyn city originaly was covering the territory of 25 sq. kilometers and was an important trade of the Great Silk Road. It was a birth place of Yusuf Balasaguni – a famous Turkic philosopher of XI century.

Karahanids (Qarakhanids) who built this city were the ones who brought Islam to the region along with new technologies. They had a strong statehood until Chingiz Khans troops destroyed their capitals in XIII century.

Balbals – ancient stone sculptures of Kyrgyzstan. With settling of Turkic tribes on the territory of KR, appear a new ceremony of burring; in which wildly spread the custom of installation the stone sculptures on the graves. Mostly they made of granite, sometimes from limestone. Also the only flagstones were selected for statues. Sometimes the surfaces were meticulously trimmed, sometimes not.

In its mass the stone sculptures are not the same, scientists distinguish 2 main groups: the 1st group are valued, round sculptures on which clearly traced the proportions of the figures and details: clothes, jewelry, weapon. The 2nd group are flat sculptures, when on the stone the contour line image just a head with the face features, or even rarely the whole figure. The last group is dominated and probably older then the 1st group. Usually the statues represent the Male-stern fighters, rarely female, the faces are mongoloid. In the right hand there is a vessel, on the waist there is a knife or sabre. 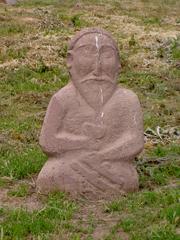 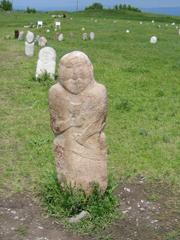 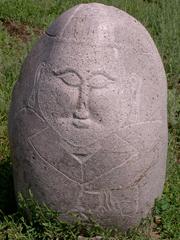 Stone sculptures date to 6-10 centuries and just very few of them to 10-12 centuries. One of the main causes of disappearing is spreading of Islam, and as it is known Islam forbid imaginations of alive people, animals, birds.

The stone sculptures were created by skillful sculptors-masons who were the great artists of the time. They could correctly reproduce the proportions of the figure, face features, jewelry. There are also 2 hypothesizes of the purposes these sculptures: the 1st one is what the stone statues represent dead Turks by themselves and the 2nd is what the stone statue is an imagination of an outstanding adversary killed by Turk in the real life, and who has to serve the winner in his next-after death life. Also, in most of the burial places main sculptures were surrounded by a number of smaller rocks that were supposed to represent the number of enemies that person killed during his life so they became his servants in the afterlife.

North of Kyrgyzstan is the single place in Central Asia where the stone statues are well known.

Ak-Beshim is a site of ancient settlement dated to 6-12 cc. Located 6 km to south-east of Tokmak township. Ak-Beshim attributed to the types of towns typical for middle century Central Asia. The central part – shahristan, was enclosed with thick fortified walls with towers. In ancient times here lived traders and craftspeople. The territory is equal of a size of 16 square km. Archaeological digs were started here in 1938 and continued until 1958. At the time of dig here were found the remnants of residential constructions, crockery, coins, items of art: gilded wares, sculptures, and other archaeological monuments.

In south part of shahristan scholars discovered a temple of two buddhas, filled with remnants of sculptures, painting and building materials. Many scientists suppose that Ak-Beshim is all that remained from town of Suiyab-the centre of western turks, tyurgeshes and kagans karluks.

The sight is located only 30 km east of Bishkek in the village "Krasnaya Rechka".

The irregular mounds and softy eroded clay walls rippling off the valley floor are the remains of the Silk Road City of Navekat, which flourished from the 6th to the 12th centuries. The founders were Sogdians; Navekat means "new city" in Sogdian. Archaeologists have discovered remains of a Buddhist temple, a fortress, a Karakhanid palace complex, and Buddhist as well as Nestorian-Christian cemeteries.