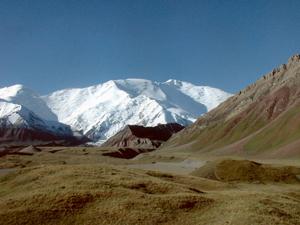 Peak Lenin in the Osh oblast lies on the border with Tajikistan – it rises to a height of 7134m and was the third highest mountain in the former Soviet Union, shaped something like a “high armchair”. The outline, however, is not always obvious because the summit is almost always covered in cloud – and it is necessary to look at it over a period of time to make out the profile.

The peak takes the form of a pyramid with a large base – the nothern slope being very steep compared to the others.

It was “discovered” and mapped by the famous Russian explorer of Central Asia A. P. Fedchanko, on his journey to the northern Pamirs in 1871. He was the first person to provide a reliable account of the geography of the Pamir Mountains .

Once called Peak Kaufman after a Russian Governor General, it was renamed in honour of the Soviet leader, and has now been renamed Kuh-i-Gamo, ( Warm Mountain ).

The first expedition to the slopes of the mountain ascent took place during the expedition in 1929. Only two people reached the glacier, but they realized that it could be the ideal base to start the climb up the highest mountain in the Zaalaiskii range.

Five years later there was a second expedition by “professional” mountaineers from the Soviet Red Army. It took them two attempts to reach the summit and erect a statue of Lenin – the highest in the world, with a spectacular backdrop of high, snow covered, peaks and ridges.

They also left a note saying that the first ascent from the North face was accomplished by three participants of the expedition on 8th September 1934 .

For some time after this there were only a relatively few attempted ascents. Perhaps, the most significant was in 1967 – in an expedition involving 301 people and dedicated to the 50th anniversary of the Soviet Union . Sixty of the mountaineers were representatives of foreign countries and there were 20 women amongst them. As a result of the expedition, four new routes were discovered – the most difficult one, on the Southeast face. There are now, apparently, some 16 routes to the summit.

The mountain now has a reputation as a high altitude “walk-up” (easy climb) and so is popular with climbers – it is one of the most climbed 7000 m mountains in the world.

Although many mountaineers gain high altitude experience here – dozens of experienced climbers have also died on the mountain, especially as the result of extreme and unpredictable weather. In particular, it was the scene of two major mountaineering tragedies. In 1974 an 8-woman team was caught by a storm and wanting to show that an all woman team could succeed they decided not to descend but to wait out the storm. Unfortunately, after their tents had been shredded by the wind, they perished one by one – the last maintaining radio contact with the outside world until the very end. Then in 1991 an earthquake triggered an icefall which trapped 44 climbers in the camp below. Only one survived, another body was found – but no other remains of the remaining 42 have ever been discovered. It is said to be the world’s worst ever mountaineering tragedy.

The mountain holds the secrets of many such tragedies, which if sometimes reveals in poignant ways. In 2003, a party of climbers found some human bones, some clothing and a knapsack – just a few meters off one of the main paths.

The main base camp is known as Achik Tash. Nearby is Lukovaya Polyana (= Wild Onion Field) – the last greenery before the stony moraines of the mountain slopes.