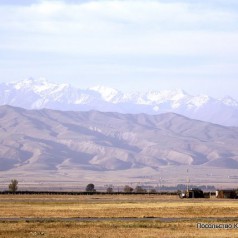 Socio-economic situation in the republic Kyrgyzskoy

A. 1991 ended the political crisis that ended the existence of the Soviet Union and the economic crisis, as it confirmed the historical doom inefficient command economy. With the outbreak of the crisis in the systemic approach to reform was unrealistic. Has not yet begun the process of privatization and the creation of competitive environment in the economy. Leadership attempts were made to the implementation of local programs. The absence of a national, state strategy made the development of very low efficiency. So for the past 10 years, reform has not had time to bear fruit.

1991-1999 – the years of severe economic crisis. Inefficient economy of Kyrgyzstan – the legacy of the Soviet period. In addition, she was one of the outsiders of the economies of the union republics. The gap existing economic relations in the federal national-economic complex, the errors in the reform process led to the decline in production. In 1999 the gross domestic product of Kyrgyzskoy was only 63.0% level in 1990 (Table 1.1)..

Especially critical were 1991-1995., When GDP fell every year. As a result, by 1996 the country's economy is the main indicators (GDP and national income) was at 1970, ie there was a rollback of 25 years ago. 1991-1995., In essence, become desperate over the years and, unfortunately, not very successful struggle with the economic crisis. Measures neutralize the effects of the crisis, almost all the time late. The reforms were painful.

In fact, rapid reform (even in the organizational and legal terms) did not work. Institutional formation of a free market open economy embraced 10 years, although not all components of the new economic system were complete. Not fully developed and adopted the legal framework of a market economy.

Table 1.2. Economic indicators of economic entities of the agricultural sector

The share of state and collective farms has steadily decreased, and the farmer – is growing and has reached the second place (tabl.1.3.)

Table 1.3. The share of farm types in the agricultural sector

When the weakened material and technical base, and a constant shortage of expensive fuel, incomplete use of arable land and pastures, depending on weather fluctuations agricultural production provided primarily by private households and farmers, and they do not have yet sufficient financial resources and technology. Therefore, it is difficult to expect from the consistently high agricultural growth.

Non-ferrous metals products gave only 95.5% of the level of 1998 again stopped the production of cement. Closed glass production. Production of building materials industry accounted for only 69.6% level in 1998

In light industry continued to decline. Observed in 1997-1998. growth in the food industry in 1999 was interrupted by a sharp decline – to 89.1% from the previous year.

Overall, in 1991-1999. once the leading industries such as engineering and metalworking, light industry, food, lost its significance in the industrial structure, and their share in 1999 in the total industrial production was respectively 4.1, 4.7, 17, 9%, while in 1990 he was respectively 25.7, 28.8, 22.3%. In the current industrial structure sharply increased the share of non-ferrous metals, from 8.2% in 1996 to 41.9% in 1999, but not at the expense of new extraction of metals, but at the expense of only one object – Kumtor. Today's industry – it is structurally not stable, not steadily working industry in the economy.

In 1999 all of the labor force were employed 67.2%. Persons of working age who are not employed in the economy, accounted for 25.6% of the total workforce, or 656.0 thousand people. Of the 656.0 thousand only 54.7 thousand recorded as having official status of unemployed. In 1999 the industry employed 11.6% of the total workforce. This is not because they are high foundations and technical equipment of labor, but because the decline in industrial production in 1991-1999. decreased. In agriculture (including forestry) employed 51.6% of the total population. In 1999, compared to 1995, the number of unemployed increased from 776.4 thousand to 885.9 thousand people, mainly due to the rural population of persons entering into a working age and not finding work in other areas.

The average household income per month in 1999 amounted to 540.9 soms. Nominal gross average monthly wages per employee – 976.3 soms. The average monthly pension – 385.0 soms. The minimum salary per month on average, remained at 100 som. The subsistence minimum (per capita per month on average) was 1097.13 catfish. Comparison of these data shows that in terms of the average of all the republic's population is below the poverty line, if you focus on 1097.13 catfish. If we proceed from the international accepted standards of the UN, the population of the republic is in a state of poverty.

Socio-economic indicators of living standards in 1999 are worse than in 1998, real disposable per capita personal income relative to 1998 amounted to 96.2%, the real gross wage per employee – 85.5%, the actual size monthly pension – 75.0%. The consumer price index in December 1999, to December 1998 amounted to 139.9%. Thus, the standard of living of the general population continues to decline.

Families who are able to dangerous, extreme, sustained poverty, it is necessary to exempt from all taxes. For different categories of need to identify different ways of social protection or support, job creation and skills development, or production of new specialties. It is important to bring people back to normal activities as the basis for forming their own well-being.

The past can not be considered in 1999 a year of economic achievements. Stabilization of economic conditions and a trend of sustained economic growth yet. This is a continuation of difficulties in 1998, when the economy has suffered greatly after the Russian financial crisis.

It is unlikely that growth in gross domestic product in 1999 compared to 1998, 3.6% can be considered a success. If this 3.6% growth achieved in all areas (or at least in the vast number of them), then we could talk about the sustainability of the economic status of a harmonious, integrated, well-stabilized growth.

But when the industry is in decline to the level of 98.3% in 1998, in its main sectors: non-ferrous metallurgy – up 95.4%, construction materials – up to 69.5, light industry – up to 92.2, the food – up to 89.1, the milling and animal feed – up to 98.4%, while in the building – up to 95.0%, can we talk about some signs of stabilization? And if in some industries and achieve growth, not through the entire range of products, but only some of its species. Inflation in the consumer sector – 39.9% – the highest in the last five years. Considering the consumer price index, real wages fell by 11.6%. Because, ultimately, the sustainability of the economy is estimated real improvement in living standards. And this yet. But in 1990-1999. reclaimed and used the land have been abandoned to their fate, out of economic circulation.

The mountains of Kyrgyzstan have a natural, water, energy, mineral, thermal and other resources and their use would ensure fully self-sufficient country. But because of the lack of a comprehensive strategy and funding sources are poorly mastered.

Working-age population is not involved in the production completely, but on the contrary, a growing number of unemployed, which is associated with the dismantling of the old economic system and the lack of jobs. Because the outflow of skilled workers has decreased the number of professionals, because of business downtime is deskilling the remaining frames, the system of training the workforce broken down, and apprenticeship negated. Republic in the Soviet period was considered an industrial-agrarian and had a relatively developed industrial potential.

Sectors of the economy were quite close production ties. Currently, these links between sectors and industries are broken, dramatically weakened.

Compounded by differences in socio-economic development of mountainous and lowland areas. The economic policy of eliminating these differences is virtually absent, and the population of the backward mountain areas and areas moved in a relatively prosperous lowlands, if it is possible in today's environment to use the word happy.

Formally, the country has developed a mixed economy, but it has not proved its viability. There is an efficient economy, which would be worked profitably and accumulated investment funds. State the legal regulation of the economy is in its formative stages. Economic system, broader-market mechanisms have not worked smoothly. Thus, in the Republic of Kyrgyzskoy severely damaged, weakened or barely apparent components of the Comprehensive Development Framework (CDF) and there is an interconnected, interdependent, interacting of resources, environment, resources, management factors.

KEY ISSUES OF ECONOMY AND INDUSTRY OF MINING DISTRICTS.

Two. Kyrgyzskaya Republic – a mountainous country, and therefore its micro-economic situation in general, will be largely determined by the quality of industrial and economic development in mountain areas. Not accidentally, the country's Comprehensive Development Framework, developed by leading economists of the Republic (Journal of Reform № 3 / July 2000, p.5-25) includes not only the republic-wide macroeconomic objectives and stages of development, but also reduce the differences in socio-economic development regions of the country. It is impossible to achieve sustainable economic development of the country where there are backward regions. Moreover, a reasonable and rational solution to the socio-economic, agricultural and industrial problems inherent in mountain areas, in fact, ensures the sustainability of economic growth in the republic as a whole.

It is easy to verify that the matters hereinafter mountain issues are transversal in nature and affect the whole country as a whole. However, the specific problems of mountain areas should be briefly described.

Problem 1. Mountain areas, despite the enormous resources that have a low level of economic and social development. Causes of underdevelopment lie in climatic characteristics of mountain areas, greatly complicating their development, and in the absence, in the past decade, the strategy for the integrated development of the country. Almost all of mineral deposits (gold, silver, tin, rare earth elements, copper, uranium, iron, antimony, mercury, silica, coal, etc.) are located in remote mountainous areas, and their development requires huge expenses.

Therefore, even the proven reserves of the earth's interior (not to mention the probable reserves) are used in minute quantities. Not all companies for the development of economically viable mineral deposits. In particular, the coal mines of the republic, because soy loss, on the verge of extinction. During the period of centrally planned system of management (lack of competitiveness and relatively low efficiency of the mining of major mineral deposits of the republic, as compared with deposits in Russia), further away development time deposits in Kyrgyzstan. As a result, the mountain regions of the republic does not have a comprehensive sustainable development.

However, as shown by economic calculations, mountainous areas of Kyrgyzstan have good prospects for industrial development, especially mining and energy sector.

Problem 2. The level of development of mining of energy resources is very low and less than 5%.