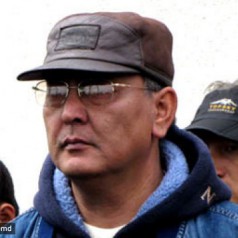 The brother of former Kyrgyz President Bakiyev Ahmad moved from the colony, where he was serving a sentence in a colony-settlement, located in Bishkek. It is reported, citing Go to the State Penitentiary.

Mode of punishment, according to Vesti.kg, was softened by the court.

Akhmat Bakiyev was arrested in July 2010 – shortly after the coup took place in the country (which is headed by Kurmanbek Bakiyev was deposed and fled the country). He was charged with organizing an illegal armed formation, illegal weapons possession and other crimes. In the summer of 2011 the court sentenced the former president's brother to seven years in prison.

Soon, however, Ahmad Bakiyev came under an amnesty: this is reflected in the fact that his sentence was reduced by one third. In November 2011, counsel for the convicted Ravshan Maksudov reported that in the near future his client be released. According to the lawyer, subject to the amnesty, as well as pre-trial detention in prison of the State Committee for National Security (which, as explained by Maksudov, the day is counted as two), put the sentence Ahmad Bakiyev has already served.

In GSIN then issued a denial, saying that even with the circumstances, brother of ex-president has to sit and sit.

However, the translation of a colony-settlement, as noted, in fact, means access to freedom. As explained by Go, Ahmad Bakiyev will not be in custody, he will only need to report regularly to the colonies.

In 2011 in Kyrgyzstan was also convicted the nephew of the deposed president Bakiyev Sanjar. He was sentenced to ten years in prison on charges of organizing mass riots and other crimes.

Kurmanbek Bakiyev after the coup, he moved to Belarus. Kyrgyz authorities demanded his extradition, but were refused.