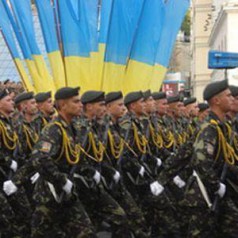 Having declared independence, Kyrgyzstan has become the way of revival of its spiritual and historical values, fundamental changes in economic, political and social spheres

One of the conditions for practical implementation of ongoing reforms in the country has been the strengthening of stability in society, to ensure reliable security of the country. Kyrgyzstan, as a sovereign state and the subject of international relations, has created its own armed forces (1992). For the Armed Forces of the Republic was formed by State. Committee of the Kyrgyz Republic for the defense, later transformed into the Ministry of Defence of the Republic of Kyrgyzskoy (1993).

May 29, 1992 was issued Presidential Decree On the capture of the jurisdiction of the formations, units and institutions of the former Soviet Union, stationed on the territory of Kyrgyzstan. This day is the day of the Armed Forces of the Republic of Kyrgyzskoy. Adoption of the May 5, 1993 of the Constitution defined the basic principles of military policy of our State, structure and development of its Armed Forces. The Constitution stipulated: Kyrgyzskaya Republic has no goals of expansion, aggression and territorial claims that can be solved by military force, rejects militarization of state. life, the subordination of the state, its activity purposes of war.

The Armed Forces are built in accordance with the principles of self-defense and defensive sufficiency, unconditional compliance with legislation of the KR, accountability of the military structures of the supreme bodies of state authority, compliance with the organizational structure and size of the fighting, security state, its defense, the ability to adequately build combat power with an increase in military threats, to maintain combat and mobilization readiness, compliance with international law and the use of world experience of military construction. Structure and development of the Armed Forces of the Republic of Kyrgyzskoy meets these principles and laws in force, is in full compliance with the military-defense concept of the country.

From 1991 to Kyrgyzskoy Republic adopted a number of regulations that have laid the legal basis for military reform. The package of laws of war include the Law of KR On Defense. On the Status of Servicemen, Voennooboronitelnuyu Kyrgyzskoy concept of etc. There is a constant improvement of the legal framework governing the activities of the Armed Forces.

Kyrgyzskaya Republic, as an equal and integral part of the modern world, subjected to threats of international and regional in nature, realizes the Nat. and collective interests in a comprehensive military cooperation with the Commonwealth of Independent States (CIS), while carrying out military and political cooperation with China, Turkey, the NATO countries.

At the heart of the military-political cooperation and collective security are: the identity or similarity of vital interests, the general nature of military threats and intimidation, objectively existing single geo-strategic space, common history, surviving the economic, cultural and many other traditional ties.

Military and executive structures of Kyrgyzskoy involved in military cooperation and information exchange within the CIS Council of Heads of State, Heads of Government Council, the Inter-Parliamentary Assembly, Council of Ministers of Defence Staff for the Coordination of Military Cooperation, interstate. Board of the Central Asian republics, the Council of Defense Ministers of the Central Asian republics. Ongoing international military cooperation with NATO within the framework of Partnership for Peace, with China and the countries of the Shanghai Cooperation Organization.

The Armed Forces of the Republic in 1999-2000 Kyrgyzskoy successfully completed the task of repelling the invasion gangs between the People's terrorists invaded the south of the country. The operation to repel the invasion was attended by all the military structure of the Armed Forces.

The Armed Forces have successfully completed their primary objective – the protection of peace and tranquility in their native land, were worthy successors of the heroic traditions of the people, who defend the freedom and independence of Kyrgyzstan in the difficult periods in its history.