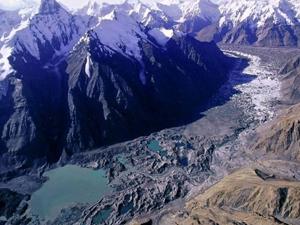 In the North-Eastern corner of Kyrgyzstan, two ridges of the Tian Shan converge and some peaks rise to over 6000m.

The Enilchek glacier snakes down from the clouds, nestling at the foot of Khan Tengri (“Prince of Spirits” or “Rider of the Sky” – 6995m) on the borders with Kazakhstan in the North and Peak Pobeda (Victory Peak, 7439m – the second highest mountain in the former Soviet Union) on the border with China in the South.  Stretching for 60 kilometers and covering an area of over 583 square kilometers with ice, some of it as much as 540 meters thick – this glacier is one of the most famous in the world.

Sandwiched between the Northern and Southern branches of the glacier lies the mysterious Merzbacher Lake, which form every summer and then, sometime in August, burst through the ice banks and the waters flow into the Enchilek River.  (Actually, the timing varies – for example in 2002 and 2004 it happened in August, but in 2003, as early as July.)  In reality, only part of the lake drains – the lake, which is 6 kilometers long and one kilometer wide, is in fact divided into two by a bridge of ice and whilst the lower half empties regularly, the upper part is always full of water. Also, the lakes empty twice a year – once in the summer and once in the winter – but most people only know about the August event.

In  1903 the German geographer and mountaineer, Gottfried Merzbacher, first discovered the lake while leading an expedition into the Tian Shan mountains aiming to reach the summit of Khan Tengri.  Forced back by ice, from their originally intended route through the Byankol Pass and along the Semyenov and Mushketov glaciers, they attempted a different approach – along the Enilchek glacier.  Once again they failed, but they had shown that Khan Tengri was in fact on a ridge and not in the centre of that particular knot of the Tian Shan mountains as had been thought.  The expedition will be better remembered, however, for the discovery of the mysterious lake that now bears Merzbacher’s name.

The expedition came across a clear lake, 3500 meters above sea level, trapped between the two branches of the glacier, with the surface studded by floating icebergs. While the group was still in the vicinity – the lake suddenly drained.  Another group of explorers, some 28 years later experienced the same event. To their astonishment the lake emptied before their very eyes, leaving huge blocks of ice stranded on the now dry lake bed. Their graphic accounts tells of how the water gushed from crevices in the ice in different locations, accompanied by great roars which frightened the horses, and how the end of the glacier seemed to threaten to break away and rush downstream destroying everything in its way. Some of the party returned the next year – only to find the lake full once more.

Although this may be the most famous of the “vanishing lakes” – there are other similar occurrences around the world: in Iceland, Switzerland and Greenland – but each one is unique and only Merzbacher seems to be so regular in its timing.

There are several theories about what is happening – some scientists suggest that the water level reaches a critical level so that the potion of the glacier that dams the lake begins to float – allowing the water to drain away beneath it. Another theory suggests that the pressure of the water actually causes deformations in the ice dam – that opens cracks, which allow the water to escape. Yet a third theory links the drainage of the lake with a canyon-like feature in the Southern glacier, (known as “The Crack”). It is thought that when the Crack fills with water, this then drains away through tunnels under the ice – creating a suction effect, which draws water out of the lake. Unfortunately, no-one really knows exactly why the lakes drain as they do.

An international expedition took place in 2004 which it was hoped would help to provide some answers to the puzzling questions about the Merzbacher lakes.  The plan was, apparently, to let the water drain and then for caver to explore the network of crevasses etc, in order to follow the retreating water.  In fact the event was late occurring and the majority of the party had already left, leaving behind just one one photographer to record the event … which he succeeded in doing … the first time it has ever been filmed.  Another ophotographer then flew over the area in a helicopter getting more unique footage of the empty lake bed.

There are several trekking routes in the area, but as part of the border zone special permits are needed. Several local firms can organize adventure trips to the region including helicopter flights and can arrange for accommodation at the Yak Farm at Echkili Tash.

In the lower valley in a spectacular setting is the Khan Tengri camp, an ideal base for acclimatization and exploring the surrounding area.