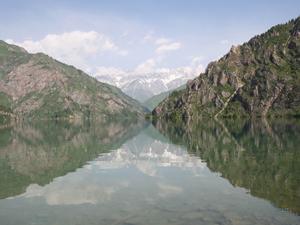 Some 500 km from Bishkek and 300 km from Osh is The Sary Chelek biosphere reserve, which lies in the Arkit Gorge, a relatively small mountain hollow in the Chatkal Mountains.  It was founded in 1959 to protect and research the pristine natural landscapes – lowland steppes and ridges with snow-capped peaks; rapid rivers and mountain lakes; blossoming valleys and alpine meadows (lying between 1200 m and 4274m) – with their varied flora and fauna.  More than 1000 species of plants, 160 species of birds and 34 species of mammals (such as deer, bear, lynx, wolves, foxes, badgers, porcupine … even snow leopards) can be found in this relatively small, unspoiled national park.  It is also supposed to be a marvellous place for those interested in insects of all kinds.

The Park and area comprises of the river valleys and settlements of the Kara Suu, Hodzha Ata (which flows along a winding course through almost all the territory of the reserve, in places between steep banks, strewn with boulders forming rapid cascades and waterfalls upto 3 meters high), Avletim, It Agar and Pacha Ata rivers. Glaciers and permanent ice fields and high mountain lakes lie on the north facing slopes. Steep sided, wooded, valleys are cut deep into the ridges by fast flowing streams –and where they open onto the plains of the Ferghana Valley, the villages of Kyzyl Tuu, Avletim and Kashka Suu grew up.

The lake itself is situated some 1873 meters above sea level, it stretches for some 7.5 kilometers, varying in width from 350 m. to 1500 m. and it at its deepest point reaches a depth of 234 m – it is the second deepest lake in Kyrgyzstan.  The shoreline is deeply indented and lined by steep forested slopes – which descend into the depths of the lake.  Shallow areas have developed only in the larger of the bays.

The water level rises with the seasons – varying by about 65 cm.  It is fed by the Sary Chelek River, many numerous streams, and underground thermal streams.  The outflow is via the TusKaul River.

There is some dispute about how it was formed – some scholars think it resulted from the collapse of two ridges of mountains which blocked the river and held back the waters and others as a result of a shift along a fault line some 2000 years ago.  The waters often appear a greenish shade of blue – and make attractive photographs.

The name “Sary Chelek” means “Yellow Bucket”.  There is a legend that a bee keeper attending his hives somewhere on the lake shore, was pouring honey into a bucket and was so taken by the colour of the honey that he decided to call the lake “Yellow Bucket”.  There are people who think that the lake derives its name from the fact that in the autumn, when all the leaves of the trees turn colour, the whole basin reminds the visitor of a “yellow bucket”.

There are also some other small lakes to the south–east (such as Kyla Kol, Iyri Kol, Aram Kol, Cherek Kol, and Bakaly Kol), but Sary Chelek is regarded as the “gem” – the “Jewel in the Crown”.

The Avletim valley has attractive gorges and forested mountains.  There is a jeep track up an impressive gorge to a jailoo with extensive opportunities to explore the high mountain areas.

Cliff paintings of wild animals (dating from the 1st and 2nd centuries) are located in the Kara-Tokoi gorge at height 3000 m. Detailed archaeological investigations, however, have not been carried out in the area. There are a few well known sites such as the Toskol-Ata Graveyard (Mazar) located on the southern shore of the Lake and a place of worship by local Muslims.

On the way to Sary Chelek is Uyum Tash – renowned as an ancient place of judgment.  A person who had committed lots of sins would try to pass through he would get stuck, squeezed or crushed but a pure person would pass through unharmed.  If someone was suspected of lying or stealing, they were asked to visit this place – and the fear this potential experience could inspire was sufficient to lead to full confessions.

The Lake’s picturesque shores are thought by many of the local population to be the most beautiful in Kyrgyzstan.  The steep slopes, (in places sheer), are covered with pine, silver fir and archa (juniper) trees.  A deontological park (tree garden or Arboretum) has been established in the reserve, and although this is not highlighted as a visitor attraction, offers the opportunity to encounter the trees and bushes of the region, with living examples to complement the dried specimens found in museums.

Generally the climate is damper and milder than in the rest of Kyrgyzstan.  The high mountain ridges protect the reserve from the cold northerly winds in winter and the temperature here is much higher than elsewhere in the valleys (although it can fall to -27.)  Snow cover in winter, which lasts for over 100 day each year, is fairly uneven – on the southern slopes, often there is no settled snow, but elsewhere it can be over a meter deep.  In early summer (May and June) there is a combination of warmth and humidity, which gives way in late summer to warm, dry, windless days.

Some fishing is permitted in the rivers feeding the lake, but not on the lake itself.  Swimming was prohibited after some fatal casualties in 1983.  Hunting is absolutely prohibited within the reserve, although illegal hunting is a problem.  Unfortunately, many visitors do not appreciate why the area is designated as a Zapovednik (reserve) and ignore the rules for visiting the reserve, even disobeying instructions from staff. They enter restricted areas, kindle fires, pick flowers and fruits, fish the lakes and rivers, and leave their garbage, all of which has a potential impact on the integrity of the biodiversity of the protected areas.

There is an extensive network of paths and horse routes through the Zapovednik. Several of the trails lead to the lake and have been used by rangers and local people for many years. Some routes start in the buffer zone around the reserve, for example from the tourbaza at Arkyt. One or more day hikes are a popular activity of guests at the tourbaza in Jylgyn. Local guides can be hired through the Zapovednik management, in Arkit village or in the villages of Kara-Suu and Avletim.  There are 3-5 day routes, which cross the Chatkal Mountain range to Talas in northern Kyrgyzstan and Goscartographia in Bishkek sell a map from Soviet times that indicates some of these routes.

There is a museum situated in a building next to the Zapovednik administration office, which contains a topographical model of the Zapovednik, stuffed animals, insects and birds, and examples of different kind of trees and their timber. Labeling and descriptions are in Russian.

Perhaps it is surprising that very few tourists actually visit the park – in 2003 a total of only 890 – including just 30 foreigners.   One reason for this is that access to the park is strictly controlled to help preserve the prisitine natural environment and, for example, camping is not allowed.

There is a new “lodge” built in the park near the lake, and a small “tourist base” in Arkyt.  In the local communities, it is possible to find accommodation in yurts, guesthouses, hotels in the larger towns and there is a couple of “tour-baza”.

The local communities offer a variety of services, and there are a number of workshops producing artifacts of local handicrafts – felt, leather, wood, silver – as well as national costume, musical instruments, horse tackle and objects of everyday use.  There are local museums in the villages of Kyzyl-Tu and Arkyt.  In the Urkit canyon there is a “geo-biological” museum.