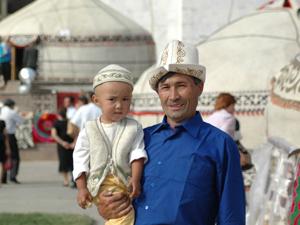 Kyrgyz are a Turkic ethnic group found primarily in Kyrgyzstan.

There are several etymological theories on the name “Kyrgyz.” First, the name Kyrgyz may mean “forty girls” (kyrk + kyz), a reference to the Manas epic. This is symbolized by the yellow sun in the center of the flag of Kyrgyzstan, which has 40 rays referring to forty Kyrgyz tribes. Next, a meaning of “forty tribes” (kyrk + uuz) which makes more direct sense. Finally, a meaning (kyrgys, adj.), meaning “imperishable”, “inextinguishable” or “undying”. This version has an obvious popular appreciation. Historical evidence for many conflicts with other peoples also supports this theory.

According to recent historical findings, Kyrgyz history dates back to 201 BC. The early Yenisei Kirghiz lived in the upper Yenisey River valley, central Siberia. Chinese and Muslim sources of the 7th–12th centuries AD describe the Kyrgyz as red-haired with fair complexion and green (blue) eyes. First appearing in Chinese records of the Sima Qian’s Records of the Grand Historian (compiled 109 BC to 91 BC), as Gekun or Jiankun, and later as part of the Tiele tribes, they were once under the rule of Gokturks and Uyghurs.

The descent of the Kyrgyz from the autochthonous Siberian population is confirmed on the other hand by recent genetic studies. Remarkably, 63% of modern Kyrgyz men share Haplogroup R1a1 (Y-DNA) with Tajiks (64%), Ukrainians (54%) Poles and Hungarians (~60%), and even Icelanders (25%). Haplogroup R1a1 (Y-DNA) is believed to be a marker of the Proto-Indo-European language speakers.

The Kyrgyz state reached its greatest expansion after defeating the Uyghur Khanate in 840 AD. Then Kyrgyz quickly moved as far as the Tian Shan range and maintained their dominance over this territory for about 200 years. In the 12th century, however, the Kyrgyz domination had shrunk to the Altay Range and the Sayan Mountains as a result of the rising Mongol expansion. With the rise of the Mongol Empire in the 13th century, the Kyrgyz migrated south. In 1207, after the establishment of Yekhe Mongol Ulus (Mongol empire), Ghengis khan’s oldest son Jochi occupied Kyrgyzstan without resistance. They remained a Mongol vassal until the late of 14th century.

Kyrgyz are predominantly Muslims. Islam was first introduced by Arab traders who traveled along the Silk Road in the seventh and eight century.

In the 8th century, orthodox Islam reached the Fergana valley with the Uzbeks. Atheism, on the other hand, took some following in the northern regions under Russian communist influence. As of today, few cultural rituals of Shamanism are still practiced alongside with Islam particularly in Central Kyrgyzstan.

The Kyrgyz in China

The Kyrgyz form one of the 56 ethnic groups officially recognized by the People’s Republic of China. There are more than 145,000 Kyrgyz in China.

Certain segments of the Kyrgyz in China are followers of Tibetan Buddhism.

Kyrgyz or Kirghiz is a Turkic language, and, together with Russian, an official language of Kyrgyzstan. It is most closely related to Altay, and more distantly so to Kazakh.

Kyrgyz is spoken by about 4 million people in Kyrgyzstan, China, Afghanistan, Kazakhstan, Tajikistan, Turkey (Asia), Uzbekistan, Pakistan (Chitral) and Russia. Kyrgyz is written in modified Cyrillic (Kyrgyzstan) and modified Arabic (China) scripts. A Latin script was used between 1928 and 1940 in Kyrgyzstan. After Kyrgyzstan gained independence in 1991, there was a popular idea among some of the Kyrgyz politicians to return Kyrgyz language back to the Latin alphabet, but this plan has never been implemented.

Hunting with eagles (Golden Eagle) is a traditional ancient art, practiced on the Eurasian steppes and particularly in Central Asia. It is similar in many ways to falconry.

In 1207 the Kyrgyz nomads surrendered to Genghis Khan’s son Jochi. Under Mongol rule, Kyrgyz preserved their nomadic culture. It has been said that Kyrgyz nomads have been hunting with Golden Eagles for 6,000 years.

There is no English word for the hunting with eagles such as ‘eagler’. Today professional hunters from Kyrgyzstan call the hunting with eagles berkutchi A berkutchi is a life’s profession, and in Kyrgyzstnais often an hereditary one. The relationship of the bird and its master is constant, and all-consuming. In the training of a young eagle, the berkutchi must sacrifice his sleep for a long period. For weeks, the growing bird is rendered sightless under its hood until its dependence on its master become complete. Such intimacy must turn into a lifelong trust with the eagle – twenty years or more. And it is said that as the man trains the eagle, so does the eagle trains his man.