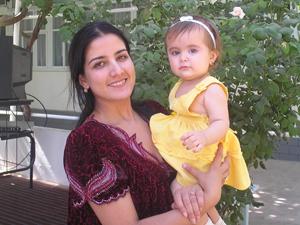 Tājīk is a term generally applied to Iranian-speaking peoples living to the east and northeast of modern Iran. Among the Iranian languages that linguists have identified as being spoken by Tajiks are "Western Farsi", "Tajiki" and "Shughni". The traditional Tajik homelands are in present-day Afghanistan, Tajikistan, Pakistan, Uzbekistan, western China, and Chitral.

Like all Iranian-speakers, and also the Indic, Dard, and Nuristani peoples, the Tajiks trace their origins to the ancient Aryan nomads who settled in Central Asia as early as 4000 years ago.

The Tajiks trace their more immediate ancestry to the East Iranian-speaking Bactrians, Sogdians, and Parthians, which means that the historical ancestors of the Tajiks did not speak Persian – the south-western Iranian language, today known as Farsi in Iran and Dari in Afghanistan. The Tajiks’ adoption of New-Persian language is believed to have been caused by the Islamic conquest of the Central Asia by the Arabs, which sent large numbers of Persians to Central Asia, India and even southwest of China. Additionally, many Persians also entered the Central Asian region as forces converted to Islam, and settled in the conquered lands. As a result of these waves of Persian migration (Zoroastrian and Muslim) in the course of more than 200 years, in addition to their East-Iranian ancestry, the Tajiks also have an important ethnic Persian ancestry which eventually resulted in the general adoption of the (West Iranian) Persian language. According to Iranologist Richard Nelson Frye, the Persian migration to Central Asia may be considered the beginning of the "modern" Tajik nation, and ethnic Persians along with East-Iranian Bactrians and Sogdians, as the main ancestors of "modern" Tajiks.

Geographical border between the eastern and the western Iranians was and is a desert Dasht-e Kavir, situated in the center of the Iranian plateau.

There are other Iranian-speakers in Central Asia such as the Hazara and Aimak who originate from the Mongol conquerors of Central Asia in the 13th century, and subsequently adopted the local Iranian languages. The so-called Mountain Tajiks or Pamiris of the Badakhshan region in Tajikistan, Afghanistan, as well as the smaller group usually known as "Tajik" in China’s western Xinjiang region are descendants of the original East-Iranian tribes.

Origin of the term

"Tājīk" is a word of Turko-Mongol origin and means (literally) Non-Turk. It has the same root as the word Tat which is used by Turkic-speakers for the Iranian-speaking population of the Caucasus. In a historical context, it is synonymous with Iranian and particularly with Persian. Since the Turko-Mongol conquest of Central Asia, Iranian-speakers in Tajikistan, Uzbekistan, Afghanistan, Iran and all the way to Pakistan, Kashmir and India have been identified as Tājīks. The term is mainly used as opposed to "Turk" and "Mongol".

History of the name

First mentioned by the Uyghur historian Mahmoud Al-Kāshgharī, Tājīk is an old Turkic expression referring to all Iranian-speaking peoples of Central Asia. From the 11th century on, it came to be applied principally to all East-Iranians, and later specifically to Persian-speakers. It is hard to establish the use of the word before the Turkic- and Mongol conquest of Central Asia, and since at least the 15th century it has been used by the region’s Iranian population to distinguish themselves from the Turks. Persians in modern Iran who live in the Turkic-speaking areas of the country, also call themselves Tājīk, something remarked upon in the 15th century by the poet Mir Ali Ser Navai. In addition, Tibetans call all Iranian-speakers (including those in Iran) Tājīk.

The word "Tājīk" in medieval literature

The word Tājīk is extensively used in Persian literature and poetry, always as a synonym for Persian.

Other meanings of the word

At certain periods of history, the word Tājīk also referred to Iranian-speaking scholars and clerks of early Islamic time who were schooled in Arabic. In the Safavid Empire, Tājīk referred to the Iranian administrators and nobles of the kingdom, linked to the so-called Qezrlbas movement.

According to some old Tājīk folktales, as well as old Persian books, the word "Tājīk" literally refers to the "people having the crown ("Tāj" in Tajik, Persian)". It is believed that it initially refers to the East-Iranian people who ruled over the Bactrian, Soghdian and Badakhshan highlands and later over other areas of Central Asia and beyond – a region traditionally known as the "crown of the world".

The language of the Tajiks is Persian, also called Dari. The variety spoken in Tajikistan is called Tajik. It is an Indo-European language, more specifically part of the Iranian language group. Tajik is an offspring of the Persian language, and belongs—along with Afghanistan’s Dari—to the Eastern dialects of Persian. Historically, it was considered the local dialect of Persian spoken by the Tajik ethnic group in Central Asia, however Tajik has far fewer Arabic loan words than the Persian spoken in Iran. In Afghanistan Tajiks continue to use the Arabic script. However, when the Soviet Union introduced the use of the Latin script in 1928, and later the Cyrillic script, Tajik came to be considered a separate language in Tajikistan. The language remains greatly influenced by Russian because of political borders. A transcribed Tajik text can, in general, be easily read and understood by a speaker of the western dialect of Persian, and vice versa, and speakers of Tajik and the western Persian can readily converse with each other. The common origin of the two languages is underscored by the Tajiks’ claim to such famous writers as Omar Khayyám, Firdausi and Rumi.

Physically, most Tajiks resemble the Mediterranean stock. The average Tajik has dark hair and eyes with medium to fair skin. Light hair and eyes are relatively common, particularly in northern regions such as Badakhan. A minority of Tajiks in Central Asia show definite Turkic-Mongol admixture, while remote mountain Tajiks appear to more closely resemble the Indo-European Soghdian, Bactrian, and Scythian populations that existed before the Turkic and Mongol invasions and migrations.

The great majority of Tajiks follow the Sunnite Islam, although small Ismaili and Jafari Shia minorities also exist in scattered pockets. Some of Sunni’s famous scholars were from East-Iranian regions and therefore can arguably viewed as Tajik. They include Abu Hanifa, Al-Ghazali, Tirmidhi, Abu Dawood, and Imam Bukhari amongst many others.