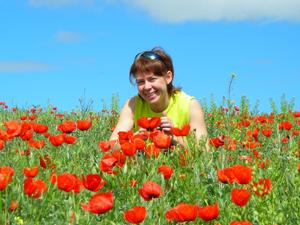 Ukrainians are one of the largest European ethnic groups with a population of more than 44 million people worldwide. Most ethnic Ukrainians, about 37 million in total, live in Ukraine where they make up over three-quarters of the population. The largest Ukrainian community outside of Ukraine is in Russia , about 3 million Russian citizens consider themselves ethnic Ukrainians, while millions of others (primarily in southern Russia and Siberia) have some Ukrainian ancestry.

Numerous nomadic tribes inhabited territories now known as Ukraine in antiquity. They included Iranic-speaking Scythians and Sarmatians, and also Greeks from the Black Sea colonies; Germanic-speaking Goths and Varangians as well as Turkic-speaking Khazars, Pechenegs and Cumans. However, Ukrainian origins are predominantly Slavic while non-Slavic nomads who mostly lived in the steppes of southern Ukraine had little influence on the ancestors of modern Ukrainians.

Gothic historian Jordanes and 6th century Byzantine authors named two groups that lived on the south of Europe : sclavins (western slavs) and anti. The Anti are normally identified with proto-Ukrainians. The name anti is of Iranic origin and means people living on the borderland. The state of Anti existed from the end of 4th to early 7th cen. In the 4th cen. the Anti fought against the Goths. In 375, Gothic king Vinitar, facing the Antis, first experienced defeat but later captured the king of Anti, Bozh, whom he executed together with his sons and 70 aristocrats. Goths did not manage to subdue the Anti, since same year Gothic union fell from Hunns. From the 6th cen. Anti fought Byzantium and in the 6-7 cen. colonised the Balkan peninsula . From the end of 6th cen. they fought against the Avars. The Anti consisted of several East Slavic tribes, such as:

which lived on the territory of today’s Ukraine . Undoubtedly these 7 tribes merged to form ethnic group known today as Ukrainians. The Ukrainian language is an East Slavic language and Ukrainian people belong to the same subdivision of Slavs as Rsyn (Ukrainian offshoot, as all Ukrainians were referred as Rusyns or Ruthenians before, from Kievan Rus’ state of proto-Ukraine), Russian (which emerged as vernacular from Church-Slavic) and Belarusian.

Slavic tribes inhabited modern-day lands of Ukraine since the ancient times and by the 5th century A.D. became dominant there and founded the city of Kiev—later capital of a powerful state known as Kievan Rus’. Kniaz Volodymyr I of Kiev adopted Christianity in 988 and proceeded to baptise the whole Kievan Rus. POlans played the key role in formation of proto-Ukrainian Kievan Rus’ state.

Among the native Ukrainian population of the Carpathians, there are differentiated several distinct groups, namely the Hutsuls, Lemkos and Boyko, each with peculiar area of settlement, dialect, dress, anthropological type and folk traditions. There are a number of theories as for origins each of these groups, some even connecting Boyky with the Celtic tribe of Boii and Hutsuls with Uz people of Turkic stock.

Ukraine had a very turbulent history, a fact explained by its geographical position. Up to the fifteenth century, Ukrainians were part of the Old East Slavic stock which also gave rise to the Belarusians and Russians. However, long history of separation and foreign influences have perceptibly reshaped their ethnolinguistic identity splitting them from the rest of East Slavs .

The history of independent statehood in Ukraine is started with the Cossacks. The Cossacks of Zaporizhia since the late fifteenth century controlled the lower bends of the river Dnieper, between Russia , Poland and the Tatars of Crimea, with the fortified capital, Zaporizhian Sich. They were formally recognized as a state, the Zaporozhian Host, by treaty with Poland in 1649.

Reply of the Zaporozhian Cossacks to Sultan Mehmed IV of Turkey . Painted by Ilya Repin from 1880 to 1891.

Ukraine originally formed part of the Grand Duchy of Lithuania and Polish-Lithuanian Commonwealth , later of the Russian, Ottoman and Austo-Hungarian empires, Poland and the Soviet Union , finally gaining its independence on August 24, 1991.

Modern Ukrainian national identity developed in opposition to foreign rule in the nineteenth century. In Imperial Russia the use of the Ukrainian language was discouraged and banned at different times in history; however, as many were illiterate, persecutions had little effect. The policy of persecution towards Ukrainians was even more pronounced in Poland . During the Soviet era, the Ukrainian language was at times suppressed at others tolerated or even encouraged.

Ukrainian is a language of the East Slavic subgroup of the Slavic languages. It is the official state language of Ukraine . Written Ukrainian uses a Cyrillic alphabet. The language shares some vocabulary with the languages of the neighboring Slavic nations, most notably with Belarusian, Polish, Russian and Slovak.

The language has persisted despite several periods of bans and/or discouragement throughout centuries as it has always nevertheless maintained a sufficient base among the people of Ukraine , its folklore songs, itinerant musicians, and prominent authors.

Ukrainians are predominantly of the Orthodox Christian faith. I Ukrainians especially in the Western region of Galicia , belong to the Ukrainian Greek Catholic Church, one of the Eastern Rite Catholic churches. Various Protestant churches as well have a growing presence among Ukrainians. There are also ethnic minorities practicing Judaism and Islam.

Ukrainian Dance is often described as energetic, fast-paced, and entertaining, and along with traditional Easter eggs (pysanky), it is a characteristic example of Ukrainian culture instantly recognized and highly appreciated throughout the world.