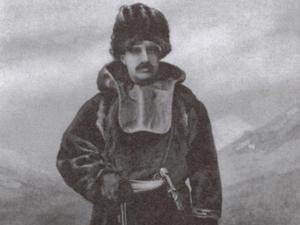 Nikolai Mikhailovich Przhevalskiy belonged to people who never stopped exploring. He has done a number of trips to unknown areas of Central Asia which had a great importance for both, Russian and western geografical science. His scientific works were granted with special awards by geografical societies of different countries.

Most of his trips Przhevalskiy has done to Chinese territories which were advised him by another great russian traveler Semyonov-Tianshanskiy who was a chairman of Russian Geografic Society at that moment and already visited this region. Przhevalskiy and his expidition crossed mongolian and chinese deserts few times, explored and discribed Alashan mountains, discovered a few unknown before lakes (Lobnor, Russkoe) but their final goal was Lhassa in Tibet which, unfortunetly, was never reached. When expedition was just a couple of days travelling from Lhassa they were met by a group of ambrassadors who said that foreigners are not welcome in Lhassa as they might attempt to steal their god Dalai Lama.

In 1888 Przhevalskiy arrives to Kyrgyzstan to start his next expedition to Lhassa from here but on the way he gets infected by typhoid which finally kills the great traveler. In his last wish Przhevalskiy asked his mates to bury him on the shore of Issyk-Kul lake and put a simple sign “Traveler Przhevalskiy” on his grave.

The monument designed by Mr.Bilderling was built here in 1893 and become the 1st work of monumental sculptures in Kyrgyzstan. Every part of the composition has own meaning. The landing bronze eagle symbolise the mind and fearless, in the eagle’s beak there is an olive branch – the symbol of peacefull achievments of science, under the claws there is a map of Central Asia with marked routes of russian expeditions. Eleven stairs leading to the monument symbolize 11 years that Przhevalskiy spent in his trips.

The museum was founded in 1957 on the territory of 15 hectares. The fond consists of 500 exhibits, among them personal items of Prjevalsky and a beautiful rifle of traveler.