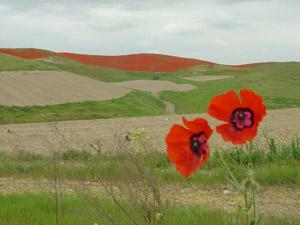 When a man dies, before he is buried, according to the shariat (law of Koran), his body must be washed. At first three closest persons of a family must wash the body. It is called "mayram suuga aluu" – the last purifying washing. Then seven representatives from that person’s relatives wash the body. This rite is called "suuga aluu" – washing the body. They make gloves of white cloth, tie round their mouth with kerchief and wearing them wash the body. While they wash it, a Muslim priest cuts out clothes – "kepin" and sews them together with white needles by hands. This white cloth must be prepared by the person himself or by his/her children and consists of 15-22 meters.

After washing the body is put on the left side of the yurt if it is the man’s body. And it is placed on the right side if it is a woman’s body. The children, relatives and friends of the deceased person guard the body during the night and talk about that person’s personal values and activities of his lifetime. In the daytime, the women sing a "koshok" – grievous song, praising the deceased person’s good features. Men stand outside the yurt in the front of the body and start a ritual weeping "okuruk" when see coming people. On the third day, after washing and wrapping the body in the white cloth, only men carry the body to the grave and bury it.

The people who have washed the body and other relatives are given the clothes of the deceased person. Firstly these people must read the Koran that is specially applicable for the person who died and only then wear his clothes.

When a person is just buried, his relatives, only women, prepare a table, make tea and other dishes and treat the men who came back after the funeral and the people that come to mourn with them. Also after the funeral the horseflesh slaughtered specially for this occasion is given to the people. This food is called "Kara ash". People finish "Kara ash" by reading the Koran dedicated to the death of the deceased person. In addition, Kyrgyz people mark forty days after person’s death, meet people, lay tables and prepare a sheep. Usually a widow/widower wears mourning during these days.

Ash (A year after death)

After a year the person who died and was buried has a monument set up by which to remember him by his/her children and relatives. The monument must be set up only within a year. Within a week the relatives of the deceased person give a dinner to the people every day desiring to content the person’s soul. The women sing koshok again and remember that person. Before each dinner the Koran dedicated to that person is read aloud again. This rite is called "Ash".