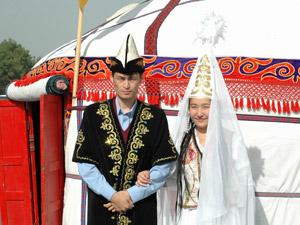 Kelin aluu (the marriage of the son)

Wedding ceremonies of Kyrgyz people are the most interesting. We would like to tell you about Kyrgyz nuptial tradition, which exists today and the difference between an old tradition and the present.

So imagine a young couple that cannot envision their life living separately. At first they should notify their parents and relatives about their final decision. Of course, wedding ceremonies are different in all the seven regions of our Republic. Yet their bases are the same everywhere.

Tradition of kidnapping the bride is the most interesting. It has been from time immemorial that a man can kidnap a young girl he loves. Usually his friends and relatives help him to do this. The plan of kidnapping is ready beforehand and on this day his relatives lay table and cook a festive dinner. A man brings a girl to his house and when she crosses the threshold of their new house a white kerchief – the sign of virginity, covers her head. Then the boy’s parents and relatives scatter "chachyla" which are "boorsoks" (traditional bread), sweets and fruits over the new daughter-in-law. By this they wish happiness and the successful welfare between themselves and her in future. Following this she bows before them and enters the house. Then she is placed behind the curtain in one of the rooms. This curtain is called "koshogo" where she sits for three days. Right after this boy’s parents invite "moldo" – Muslim priest, who blesses the marriage in a special wedding ceremony according to the Muslim tradition. This tradition is called "nike kyiu", after which the bride and the groom will be considered husband and wife before Allah. During these three days women and girls come to see her and give "korunduk" – usually money and a new kerchief. On the fours day a young wife begins too do the woman’s work about the house. Today this custom is still observed in Kyrgyzstan.

But the modern wedding ceremonies are also popular. After the groom’s relatives will be notified about their son’s intentions, they go together to the bride’s home. Here a proposal takes place. When the parties have agreed, the groom’s mother puts golden earrings in the bride’s ears. This means that the young couple is engaged from this very moment. Then all decide the time and place of wedding – "Toi". The bride then stays in her parents’ home until she is taken to the groom’s home according to a special rite. The bride may be brought to the groom’s home immediately before the ceremony, or perhaps earlier in the day. In any case even if he had kidnapped the bride or the marriage had passed by a mutual agreement of both parts, the bride’s parents must send the dowry – "sep". Sep must include new clothes for all seasons, blankets – "juurkan", pillows, special national wall and floor carpets called "shirdak", "toosh-kiyiz" and "ala-kiyiz" made of felt and cutlery also.

Modern well-to-do parents nay present furniture, home appliances. After the engagement the groom’s relatives usually get ready to a wedding ceremony. Aside from paying for the wedding, the groom must pay the ransom – "kalym’ to the bride’s parents. This sum may vary from 10 000 soms to 10 000 $, depending on financial capacities of the groom’s site. Along with the kalym boy’s parents present a horse, 2-3 sheep and both parties present each other new clothes. These clothes are called "kiyit" and include coats, suits, dress lengths, shirts and kerchiefs.

So the wedding ceremony begins in the palace of Weddings – "Bakyt orgosu", where they register their marriage. Afterwards just married couple travels around the city, visit famous monuments and lay flowers. In the evening, round about 5-6 o’clock, everybody gather in the restaurant or cafe where continue a wedding toi with lots of presents and money in envelopes.

After the wedding the young wife has no right to visit her own parents until she together with her new relatives pay a traditional visit – "otko kirgizuu", – such kind of permission to leave the groom’s house and visit the relatives. During this visit, the groom’s parents offer a large present to her mother – "sut akysy" – it is a cow. Symbolically, this means that they wish to replenish all expenditures that her mother has invested in her daughter from birth until marriage.

Now, after all this rites usual family life begins.

"Otko kirgizuu"- is initiation into the family hearth and follows the marriage rite. Relatives of the boy invite the young couple to their houses and thus become closely acquainted with their new daughter-in-law. A young wife is considered an equal member of a new family only when she prepares her first dinner. The young wife goes with her mother- in-law to their relative’s houses and they bring some presents with them.