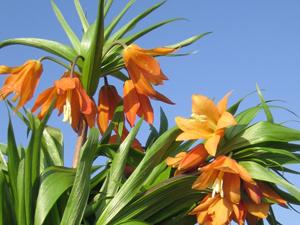 Another great marvel of Batken is the Aygul flower, its scientific name being hazel-hen-eduardo. The flower is peculiar in that it only grows in the shade in the mountain areas. Aygul, the mountain flower – grows to one meter in height, it has long green leaves growing all along the stem, has reddish yellow petals and it looks similar in shape to a bluebell. Aygul blooms in April and for generations each April, people have celebrated this with a Flower Holiday.

Unlike the other cities of Kyrgyzstan , Batken is relatively close to five thousand meter high mountains. These mountains known as “piatitisiachniki”, makes Batken very attractive to mountaineers.

There is a complex of monuments in the city: one is dedicated to the Kyrgyz epic Manas heroes and a replica of the monument of Manas in Bishkek city – the capital of Kyrgyz Republic .

The town of Batken was established in April 1934 as the center of the rayon of the same name. In 1999 the Batken oblast was created, with Batken city as its administrative center. In 2000 Batken was granted the status of a city under rayon jurisdiction.

The climatic conditions and administrative and territorial structure of the city:

The city is situated at a height of 1036 meters above sea level. The summer is hot and dry here and the winter is relatively cold. The duration of winter period is about 100 days.

The city relief is as follows: a mountain plain (an irrigated area), a mountain ridge area (non-irrigated farming and spring-autumn pasture area), a low mountain area and the mountains (local pasture areas).

In terms of administrative and territorial organization, the city is divided into six districts the Airport Bazaar- Bashy, Bulak-Bashy, Kelechek, Kyzyl-Don and Kyzyl-Jol.

Population and its composition;

The population of the city has representatives of 14 nationalities. The overwhelming majority of the city population is Kyrgyz – about 99.5% of the total.