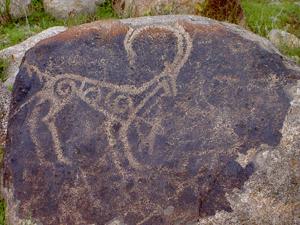 Cholpon-Ata is the largest town on the Northern shore of the Issyk-Kul lake, about half way along, some 250 kilometers from Bishkek. Summer always saw large numbers of tourists in one of the nearby sanatoria or tour resorts (Cholpon-Ata boasts one of the two Presidential residences on the lake), and Soviet athletes used to come here to train at altitude. Although there are still large numbers of summer visitors, the region has lost some of it’s appeal as it has failed to keep pace with the competition. There is a small market for everyday necessities, a yacht club, (it is possible to take boat trips on the lake), a hippodrome and a major stud farm. There is a museum displaying archaeological finds from around the region and the Chui valley, musical instruments, traditional craftwork, exhibitions devoted to the Manas Epic, Akaev and Chinghiz Aitmatov. The town also hosts a museum dedicated to the Kazakh writer Auezov.

Just to the North of the town lies an "open air art gallery" – containing a fine display of petroglyphs which date from the sixth to the first century BC.

In the Canyon above the town are forests, the Kyzyl Beirel waterfall, the Chon Koi canyon Suu. As well as the sanatoria, accommodation is possible in a number of homestays. A little offshore is the sunken village of Chengu – "red valley" – the capital of the ancient Usun State in the second century B. C. – and as the waters of the lake receded it is thought that the village will soon emerge from the depths. Referred to by early Russian explorers to the region, diving expeditions were undertaken in 1956. The divers found several baked bricks, fragments of ceramic dishes, a piece of a ceramic pipe (which suggests a high level of local civilization), bronze arrowheads, iron knives, and the bones of both people and animals. Offshore, opposite the villages of Korumdy and Temirovka and near the Grigoryevskaya harbor, archaeologists found fragments of ancient pots dating back to the Bronze Age. Unfortunately, only a few of such articles are preserved because most of them were taken by local residents and tourists as souvenirs. The knife handles are topped with large figures of horses or sheep.

The horses look very realistic: with large heads, long tails, and well-developed leg muscles – typical of steppe horses. One of the most interesting finds from the bottom of Issyk-Kul is a sacrificial table of almost square shape. It has four legs shaped like a woman’s body, 22 cm high. These figures are well preserved: slant eyes, wide nose, oval chin, and a short and strong neck and scholars think these figures can suggest how ancient residents of the Issyk-Kul region looked.

Another find was a large hemispheric sacrificial pot with two horizontal handles and a relief Tampa (the seal of the master) resembling a crescent with the points directed downwards. Such pots were widespread in this region in the 2nd half of the 1st millennium and more than 10 such pots have been found at Issyk-Kul – but this pot was the largest. It is thought that such pots were used only on holidays and special occasions. The large size of these pots testify to big feasts of ancient cattle breeders in honor of their gods.