Uzgen (Ozgen) – Some 55 kilometers north-east of Osh – with a predominantly Uzbek population and this region was the scene in 1990 of ethnic conflict between elements in the local Kyrgyz and Uzbek communities in which there was a large loss of life.

There are many claims made the city, that: 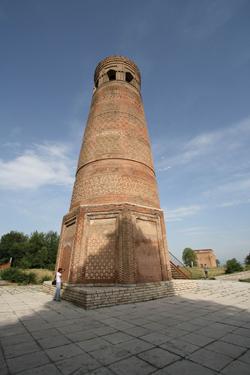 It was an important center on the trade routes between the Ferghana and Semirechye (Seven Rivers region). Uzgen became a highly developed town in the Karakhanid epoch and developed into a large trading and handicrafts centre.

At that time there were a large number of mints producing coins and about 900 coins have been identified as being minted in Uzgen around the turn of the millenium.

Tenth century accounts depict the sity as populous and busy, with a citadel, sackhristan bazaars – with gardens and canals laid out around the city.  There was a city wall around the entire settlement with four gates.  There were no bridges across the river – and it was necessary to ford the waters.

In the 11th and 12th centuries Uzgen was one of the capitals of the Karakhanid State (at that time it was called Mavarannahr). However, from the 13th century it gradually lost its economic significance.

The ancient city of Uzgen was located on a high bank of the Kara-Darya river and consisted of three shakhristans, of which only hills and ruined walls remain.

However, an 11th century minaret survives and three Mausoleums dating from the 11th and 12th centuries – and are acclaimed as one of the unique architectural sites of medieval Central Asia. The complex has been recently restored and is featured on the back of the 50 som note.

A little to the North East are the petroglyphs of Kara Dzhar.

The economy of modern day Uzgen is basically agricultural. Rice is grown in the surrounding area and tobacco, apples and sunflowers (for the oil) are also basic crops. There is a brewery in the town, which is very highly rated locally. 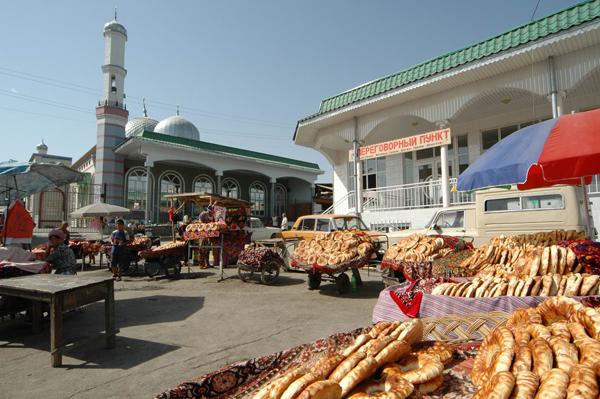