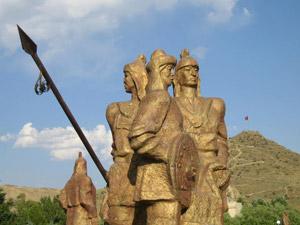 Talas is a small town in northwestern Kyrgyzstan, located in a long valley between two imposing mountain ranges. Its population is 32,538 (as of 1999). It is the administrative headquarters of Talas region. The town was founded by East Slavic settlers in 1877.

Its economy traditionally oriented towards the ancient city of Taraz (once named Talas and Dzhambul) in present day Kazakhstan, the Talas valley has suffered severely from the imposition of rigid border controls by Kazakhstan following the demise of the Soviet Union, as transport and trade links to the rest of Kyrgyzstan are now constrained by the formidable mountains separating it from the Chui Valley and Bishkek. The only motorable road to Bishkek and the rest of the country rises to a height of more than 3500 m above sea level before descending in many turns to the Chui Valley and Bishkek.

The mythical Kyrgyz national hero, Manas, is said to have been born in the Ala-Too mountains in Talas region. A few kilometers outside Talas lies a mausoleum, supposedly that of Manas, called the Kümböz Manas. However, the inscription on its richly-decorated facade dedicates it to "…the most glorious of women Kenizek-Khatun, the daughter of the Emir Abuka". Legend explains that Manas’ wife Kanykei ordered a deliberately false inscription in order to mislead her husband’s enemies and prevent the desecration of his body. The building, known as "Manastin Khumbuzu" or "The Ghumbez of Manas", is thought to have been built in 1334. It now contains a museum dedicated to the epic. A ceremonial mound also lies nearby.