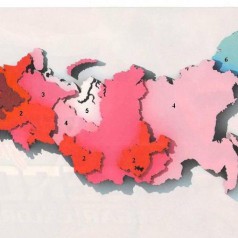 In the economic development of regions of the country (7 regions and Bishkek), there are significant differences. At one stage (1991-95) of the transition to market relations in connection with privatization, as well as with different objective (rupture of economic ties with former Soviet republics) and subjective reasons, the industrial enterprises were in dire straits. The level of industrial production fell, weakened the system of public services. The decline in production in the regions was different depending on the characteristics of the structure and content of each branch. It was much higher in industries that work on imported raw materials than in those to-rye used local materials. In the 1991-95 decline in production in Bishkek was 80.2%, in Jalal-Abad region to 20% in the rest of -59-79%, so that has changed the industrial structure in the regions. The share of Jalal-Abad region in the total industrial output increased from 12% in 1991 to 26.3% in 1995, at the same time, the share of Bishkek decreased from 30.4% to 21.7%, Chui oblast – 33.6% with to 30.6%, Issyk-Kelskoy – from 3.9% to 3.0% in Osh region – from 17.5% to 16.7% in Talas oblast – from 1.4% to 0.8% in Naryn region – from 1.2% to 0.9%. As a result, Jalal-Abad region for the production of industrial products came in second (after Chui) place.

Agricultural Production production in comparison with industrial declining less. At the same time reducing production in the livestock areas, there was more than in farming. This is due mainly to a decrease in livestock numbers, especially in the public sector. In 1991-95 the production of agricultural production has decreased: in the Naryn region by 34.2% in 1991 (the share of livestock in total agricultural output amounted to 82.4%) in the Issyk-Kelskoy of -34.1% (71.1%), in That lasskoy of 25.7% (67.3%) in the Osh region -18.1%.

In 1997-98 the trend of growth at the expense of small and medium businesses, as well as cooperation with foreign investors. Over the past two years (1999-2000) on the main socio-economic indicators in all regions and in Bishkek tended to stabilize, increase production and service delivery. In regions of increased number of manufactured industrial products. Noticeable changes in agriculture, construction, trade and other industries.

The uneven development of regions of the country due to their specific features, according to eye-regions of the Republic Kyrgyzskoy ki can be divided into three groups conditioned.

Group 1 – Bishkek, Chui and Jalal-Abad region, with sufficient capacity and the corresponding base, economically well-developed.

Group 2 – Issyk-Kelskaya, Osh and Batken region, the k-ryh socio-economic development is at the middle level, in terms of individual sectors and areas correspond to other groups.

Group 3 – Naryn and Talas oblasts, the k-preferred orientation is observed ryh, enclosing a large proportion of agricultural sector, they can be considered as forming a food base regions of the republic.

Regions of the country differ in their areas, natural and economic potential, count the population and its location, structure, management and specialized tion.