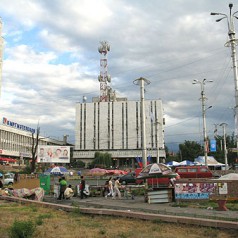 Bishkek – the capital of the Republic of Kyrgyzskoy. Is the political, economic, scientific, cultural and educational center, the main transportation hub. The total area of ​​the urban area – 115.7 thousand hectares. Tion of the population is 790.9 thousand people. (As of 2000). In Bishkek, includes four administrative units: Pervomaisky, Lenin, the October and the districts of Sverdlovsk, and urban-type settlement Jong-irrigation ditch (7.9 thousand). With. Ortho-Cy (4.1 thousand)..

Nature. Relief. The city is situated at the foot of Kyrgyzskogo Ala-Too, in the center of Chuy tion of the valley, on a sloping plain formed by alluvial fans fused bath rivers myudyun Ala and Ala-Archa at an altitude of 750 m above sea level it. The plain, composed of loess formations are gradually falling, approach leads to the floodplain. Chui. The riverbed is pressed against the sitting. board Chu basin and is located at distances 20 km from Bishkek. The width of the Chu basin on the meridian of the city – 60 km.

The geological structure. The central part of the Chui valley, where the Bishkek is structurally asymmetrical megasinklinal sublatitudinal location. The modern city is confined to the border to the south. part of the syncline Chu, a so-called Bish kekskomu deflection created by the Paleogene-Neogene continental deposits of the new, Hall gayuschimi the eroded surface of Paleozoic basement skogo. Paleozoic rocks from geophysical data, lie at a depth of 5000 m and are mainly gneisses, schists, limestones, and volcanics. The total capacity of the Paleogene-Neogene rocks of 4.5-5.0 km. They are covered with a thick cover of unconsolidated Quaternary formations tion of age. In the alluvial genesis proluvial they are boulder, galech nicknames with gravel and sand aggregates, and bundles of interbedded sands and lpg inequigranular linisto-sandy formations. According to seismic zoning of the territory belongs to the 9-point zone. On the territory of the theory in 4 places from the depths of 1500-2000 m derived hot mineral water. In've amounted water contains chlorides, sodium, calcium. The waters have medicinal properties, Guth can be used to treat skin diseases, stomach-ki muscular and venous diseases.

Climate. Bishkek, the conditions of climate is the extreme south. position in the context of moderate continental climate Shea mouth. The number of sunny days per year on average 322 (2000 hours). Monthly sunshine duration: the highest in July – 332 hours, the lowest in December – 126 hours. The average annual temperature is 10,2