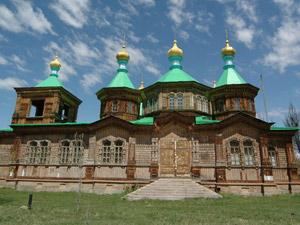 In 1876 Russian troops defeated the Quqon Khanate and occupied northern Kyrgyzstan. Within five years, all Kyrgyzstan had become part of the Russian Empire, and the Kyrgyz slowly began to integrate themselves into the economic and political life of Russia. In the last decades of the nineteenth century, increasing numbers of Russian and Ukrainian settlers moved into the northern part of present-day Kyrgyzstan. Russian specialists began large-scale housing, mining, and road construction projects and the construction of schools. In the first years of the twentieth century, the presence of the Russians made possible the publication of the first books in the Kyrgyz language; the first Kyrgyz reader was published in Russia in 1911. Nevertheless, Russian policy did not aim at educating the population; most Kyrgyz remained illiterate, and in most regions traditional life continued largely as it had before 1870.

By 1915, however, even many Central Asians outside the intelligentsia had recognized the negative effects of the Russian Empire’s repressive policies. The Kyrgyz nomads suffered especially from confiscation of their land for Russian and Ukrainian settlements. Russian taxation, forced labor, and price policies all targeted the indigenous population and raised discontent and regional tension. The Kyrgyz in Semirech’ye Province suffered especially from land appropriation. The bloody rebellion of the summer of 1916 began in Uzbekistan, then spread into Kyrgyzstan and elsewhere. Kazaks, Turkmen, Uzbeks, and Kyrgyz participated. An estimated 2,000 Slavic settlers and even more local people were killed, and the harsh Russian reprisals drove one-third of the Kyrgyz population into China.