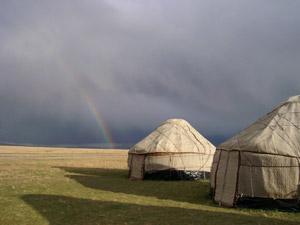 The Kyrgyz began efforts to gain protection from more powerful neighboring states in 1758, when some tribes sent emissaries to China. A similar mission went to the Russian Empire in 1785. Between 1710 and 1876, the Kyrgyz were ruled by the Uzbek Quqon (Kokand) Khanate, one of the three major principalities of Central Asia during that period (see fig. 3). Kyrgyz tribes fought and lost four wars against the Uzbeks of Quqon between 1845 and 1873. The defeats strengthened the Kyrgyz willingness to seek Russian protection. Even during this period, however, the Kyrgyz occupied important positions in the social and administrative structures of the khanate, and they maintained special military units that continued their earlier tradition of military organization; some Kyrgyz advanced to the position of khan.