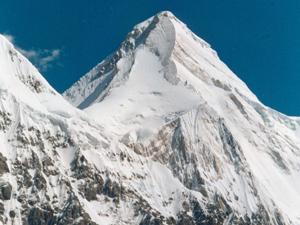 The Enylchek (sometimes Inycheck) glacier is one of the world’s largest glaciers with its south fork extending 62km. The north fork lies in Kazakhstan leads to the base camps for the northern approach to Kahn Tengri. Near the head of the south fork two peaks, Khan Tengri “Lord of the Spirits” (6995m/7005m in dispute) and Peak Pobeda “Victory” (7439m) receive almost all of the climbing traffic.

Getting to Enylchek from Bishkek requires a two day drive via the city of Kara Kol to Maida-Adyr. From there it is a 30 minute helicopter flight above the south Enylchek glacier to the base camps (4100m) There are several sights where companies establish their base camps all within a few hours walk from each other. An alternative to the helicopter is a four-day walk up the glacier. Some groups put their supplies on the helicopter and choose to walk as a way to save money and acclimatize. Prices vary but a one way helicopter trip with gear costs about $150 in 2004.

Base camps are located on the glacier moraine between the summits of Khan Tengri and Pobeda. There are several companies that share services here which include email, a sauna, meals, and porter service. Most companies provide food at the camps, while the climbers are responsible for high altitude provisions. This is one of the world’s best bargains for a 7000m peak. Full service expeditions, Bishkek to Bishkek, cost just over $1200 in 2004. 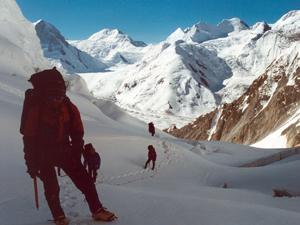 For sheer elegant beauty the summit of Khan Tengri may have no peer in the world. Alpenglow on the southwest wall glows red in the evening, the pointed summit seems to burn a hole in the sky. First climbed by a Soviet team in 1931, there are now 18 established routes. The Classic route (5b) climbed by almost all commercial expeditions from the south is a popular objective for high-altitude climbers with modest experience. The lower section climbs the heavily crevassed Semenovsky glacier to a 6000m saddle. This section is exposed to substantial avalanche hazard. The summit is a one-day push from the saddle and negotiates a myriad of notoriously tattered fixed lines. The late Alex Lowe climbed this route in 1993, base camp to summit and back in a new record time of 10 hours and 8 minutes.

Peak Pobeda, on the west side of Enylchek glacier is a monstrous peak that often goes several seasons without a successful attempt. The summit has the distinction of being the northernmost 7000m peak in the world. It is a forbidding mountain, where countless Soviet climbers have lost their lives on its long exposed ridges. The classic route on Peak Pobeda is not as esthetically pleasing as the route on Khan Tengri. The route begins well to the east of the summit then traverses at 7000m along the eastern ridge; a final camp is set at 7100m before the true summit. Many parties are turned back by high winds. An alternative is the original Abalakov route which takes a direct line from the glacier at 4100m. Vitaly Abalakov, the father of Soviet Mountaineering, made the first ascent of this peak in 1943 by this route. Due to ice fall and avalanches few parties attempt this route. In 2003 a Russian team reportedly put a new route on the north face of the east ridge (grade unknown).

There is tremendous potential for new routes in the Tien Shan. A large collection of 5000m and 6000m peaks rarely see ascents, and those only by the most obvious line. Neglected peaks include the peak of Military Topographers, Chapaeva, and Gorkova to name a few. These peaks can be reached from the same base camps used for climbs on Khan Tengri and Pobeda. Peaks in the nearby Kaindy region require a longer approach and involve special travel arrangements.

The climbing season on the high peaks is very short, lasting only about 6 weeks from mid-July to the end of August. For climbs below 6000m September provides stable weather and easier river crossings.