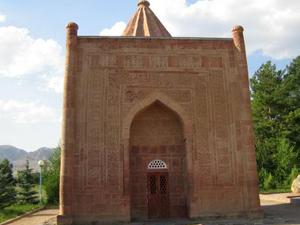 «Маnаs-оrdо» In 20 km to northeast from the city of Talas at the skirt of mountain Manastyn-Chokusu on coast of the mountain river Ken- Коl, there is an interesting monument connected with a beautiful legend. According to the legend, many centuries back, here the legendary hero of the Kyrgyz epos «Маnas» has been buried. The mausoleum of XIV century «Маnаs-оrdо» – a tomb constructed as a tomb of the daughter of Emir. But the legend says, that it is a tomb of Маnаs, built by his wife Kanykei, who to not attract the attention of enemies wishing to profane the memory of hero, ordered to write in an inscription a name of the daughter of Emir. In the territory of complex «Маnаs-оrdо» there are sak-usun barrow burials (I century BC) and monuments of Ken-Kol tomb dated I-II century BC, which belonged to Huns who came to Central Asia. Here it is possible to examine tomb stones – stone sculptures (balbals) of VI-IX centuries BC, as well as one of the thirteen stones with the оrhon-Yenisei inscription.

Talas State Reserve. The gorge «Besh-Tash» is to the south of the city of Talas on northern slopes of Ala-Too. On slopes grow undersized juniper trees, some places passing to picturesque groves of the park type. Here at the height of 2997 m. there is a pond-like lake «Besh-Tash» of turquoise color. Here many marmots are found in vicinities. In Besh-Tash the sports-tourist complex with pool is created, horse routes are developed.

«Chon-Kapka» – the gorge of Echkili-Too ridge on Talas river, here the Kirov water basin is built. In the territory of area there are more than 70 lakes, many of which are small, high-mountainous, of a glacial origin.