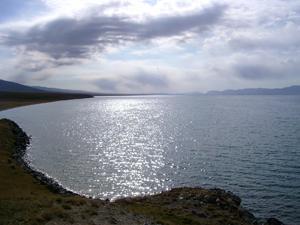 The largest lake in Naryn area is Lake Song Kul, lying at 3016 metres amongst steppe vegetation. It is 29 km long, 18 km across and 13 metres deep. The lake is home to countless wild geese, ducks and other waterfowl. It is one of the loveliest spots in Kyrgyzstan, surrounded by alternating white peaks, staying on the shore you can easily count the sheep on the opposite side of the lake. The lake’s colour changes from violet to dark blue to pink, depending on the time of day and the weather. There are no solid buildings in this area – shepherds come here in June and stay in yurts all summer long.

Only place to find a place to stay here is a tent or, so called, "Yurt Inns" where you will be provided with sharing accommodation in yurt and traditional meals. 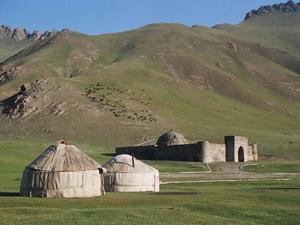 115 km south of Naryn, one can visit the beautifully preserved 15th century Tash Rabat caravansarai. Its importance for the science conclude not only because it is the latest building of ancient architecture in Kyrgyzstan, but also in unusual plan of the building, the kind of row materials and other things.

Firstly the caravanserai was mentioned by Mohamed Hider, the author, lived in 16th century. He supposed that Tash-Rabat was built by Mohamed Khan, who ruled in Mogulistan in the 1st part of 14th century.

Talking about the purposes of Tash-Rabat, the scientists suppose that functionally it is a caravanserai (the hotel) set on the brunch of Silk Road, but some other details, folk legends and stories give an ability to think Tash-Rabat was built by Nestorians, and served as Nestorian Church in the past.

Torugart Pass 3752m, one of two border crossing between Kyrgyzstan and China. The pass lies 400km south of Bishkek and 160km north of Kashgar. Border formalities might take some time but it will be overtaken by all the positive impressions that you will experience on the way. The way to the pass is surrounded with very relaxing scenary: yurts, yaks, horses and shepherds that make you forget about all the western rutine. On the way you will see the highest in Kyrgyzstan Lake Chatyr Kul. Set at 3520 m above sea level and measuring 23km long by 11km wide, it is 18 m deep at its deepest. The lake is frozen from October to May. The main Bishkek-Torugart highway to the Chinese border skirts Lake Chatyr Kul before arriving at the Torugart Pass.