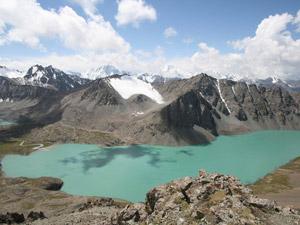 Ala Kol lake is on the popular trekking routes between Altyn-Arashan and the Karakol gorge at an altitude of 3532m.  It is often the first overnight stop on the route between Altyn Arashan to Djety Oguz, but it can be reached in a (long) day from either of the Alyn Arashan or Karakol valleys – but only in the summer months – and, although the trek is popular, the route is not regarded as "easy".

It is set in a barren, rocky depression and surrounded by the peaks of the Terskey Ala Too range.  The lake is approached along rocky paths and scree slopes.

The lake is 2.3 km long and 700m wide which makes it the largest of the 729 lakes in the Issyk Kul basin.  No one seems to know how deep it is, at least, (we can’t find a recod of its depth anywhere in the literature), but the Encylopedia Kyrgyzstana says that the volume is 4.3 million cubic meters.

The crystal clear waters of the lake are fed by glacial streams and the outflow forms a waterfall.   It freezes from October until May.

The lake’s colour changes according to the time of day, the season and the weather – the waters can seem violet, dark blue or even pink.