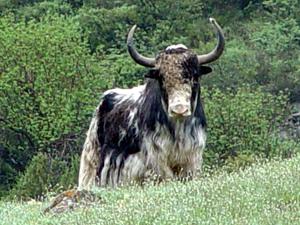 Yaks are large animals, they can reach two metres in height, a relative of cattle.

As long ago as 3000 years ago, they were first tamed by man. Domestic yaks tend to be smaller and quieter than wild ones. They don’t need special care and they are able to survive on scanty mountain vegetation.  As well as being husbanded for their hair, milk and meat, they are used as pack animals.

The wild yak weighs can grow up to 1000 kg but domesticated ones are usually only half that weight.   They can grow to 1.8 meters tall, have long, coarse, black hair and a hairy tail (which was used by the Ancient Chinese as a symbol of authority) and grow horns which can reach half a meter in length.

Their natural habitat is in treeless uplands, including plains, hills, and mountains, from as low as 3200 m up to the limit of vegetation at about 5400 m. They stay in high areas with permanent snow during the warmer months of August and September, and spend the rest of the year at lower elevations.

The wild yak grazes on grasses, herbs and lichens. They can graze on the alpine grasslands in the summer and during winter on the shrubs in deep snow quenching its thirst with snow and ice. They loose weight during the winter but recover and gain weight rapidly with the coming of spring grass.

Ordinarily yaks gather in groups of 10 – 30 or more, but they may occasionally be observed in large groups of 100 – 200. Herds in the wild are not stable units: they readily split, or two or more may join together.

Yaks are sturdy and well adapted to coping with the extreme climatic conditions. Their thick hair forms the charateristic “skirts”, under which a mother will hide her calves from cold weather. During the winter season they even bathe in ponds which haven’t frozen over.

In domestic yaks, females first calve at about 3-4 years old. Full size is reached at about 6-8 years old. Most births occur sometime between April and June. Domestic yaks give birth to single calves in alternate years, but in areas of poor grazing, a few may give birth only once every three years. The young become independent after about 1 year. They can live to about 25 years of age.

Today yak meat is highly sought after as a delicacy.