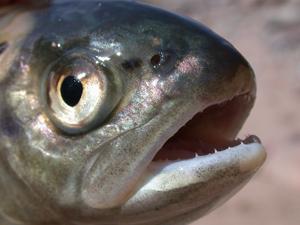 Fish provide an important source of iodine – otherwise lacking in the Kyrgyz diet – and is a popular form of food.

Today, there are some 54 species found in Kyrgyzstan – 38 of them indigenous and 16 introduced. The greatest diversity is found in Issyk Kul and the larger rivers … depending on the waterflow and number of different habitats available. Only a few species are found in most of the country and most lakes feature only two or three species. These are mostly small and not commercially important.

A large variety of fish have been introduced into the waters of Kyrgyzstan – mainly into the Issyk Kul region, Son Kul and the various reservoirs – some having a serious effect on the populations of local indigenous species. Fish were introduced into Lake Son Kul in 1959.  Although Chatyr Kul has no fish – it does have some freshwater shrimps.

Fishing is an important activity on Lake Issyk Kul. The name of the town at the Western end of the lake, Balykchi, is the Kyrgyz equivalent of the town former Russian name – Rybachi – which loosely translates as “Fisherman”.  (Ryba is the Russian word for fish.) There is a story that a Russian soldier serving in the region fell in love with the area and decided to retire here. He had so much success fishing from his home made boat that many local people came to settle nearby, followed his example and took up fishing the waters of the lake. When he died, it is said that the town that had grown up around his hut was named in his honour: Riybachie – “The Fisherman”.

Angling takes place on a number of mountain rivers, Lake Issyk Kul, Son Kul and several of the reservoirs. It requires a permit and there are restrictions on the size of catch permitted (e.g. upto five kilograms per day and for some species – upto 5 fish). The permits are not expensive – although there are different rates for locals, citizens of CIS countries and citizens of other countries. Fishing at night is not allowed. Although Celestial Mountains do not operate fishing tours several companies do.

A recent development has been the introduction of “fish farming” with a productive farm situated just South of Bishkek.

The fish of Kyrgyzstan have been studied over the centuries. Early studies or observations were carried out by Russian explorers. A standard reference book, “Fish of Kyrgyzstan” was published in 1990. In 2004, a book called “Looking at Fishes in Kyrgyzia” was published – as a direct result of the work of the TACIS West Tien Shan Biodiversity project. It has text in both Russian and English and a large number of illustrations. It details the habitat and distinct features of each type of fish found in the waters of the Kyrgyz Republic and offers an invaluable guide for identification