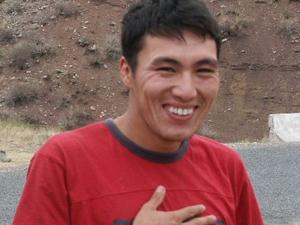 The Kazakhs are a Turkic people of the northern parts of Central Asia (largely Kazakhstan). They are famous for their self-reliance and military skills, particularly horsemanship.

There are many theories on the origin of the word "Kazak". "Qazaq" was included in a 13th century Turkic-Arabian dictionary, where its meaning was given as "independent" or "free".Both Kazaks and later Cossacks adopted Turkic social term "qazaq" as their name.

The Kazaks have a legend about a white goose (Qaz means goose, Aq means white). In this Creation Myth, a white goose flying over the great steppes was impregnated by the rays of the Sun, giving birth to the first Kazak. This version was rejected by linguists, because in Turkic languages, an adjective is put before a noun, therefore, "white goose" would be Aqqaz, not Qazaq.

One of the theories on the origin of the word "Kazakh" (originally "Qazaq") is that it comes from the ancient Turkic word "qazğaq", first mentioned on the 8th century Turkic monument of Uyuk-Turan. According to the notable Turkic linguist Vasily Radlov and the orientalist Veniamin Yudin, the noun "qazğaq" derives from the same root as the verb "qazğan" ("to obtain", "to gain"). Therefore, "qazğaq" defines a type of person that seeks profit and gain.

Kazakh stamps featuring a traditional bride’s dress, groom’s clothing and the interior of a kiyiz uy, a traditional Kazakh yurt.
Kazakhs are descendants of Turkic tribes (Kipchaks or Cumans), Mongol groups (Kerens, Naimans, etc.) and Indo-Iranian tribes (Wusun, Sarmatians, Scythians, etc.) which populated the territory between Siberia and the Black Sea and remained in Central Asia when the Turkic and Mongolic groups started to invade and conquer the area between the fifth and thirteenth centuries AD.

As shown on PBS’ "Secrets of the Dead" in the episode entitled "Amazon Warrior Women," there is strong evidence that some of the Kazakh population are descendants of the culture which spawned the Amazon Warrior myth within Ancient Greek literature.

Due to their complex history, Kazakhs display phenotypical diversity. Kazakhs exhibit predominantly Mongoloid features. Fair to light-brown skin tends to be the norm. Among physical traits are aquiline noses, epicanthic folds and high cheekbones. Hair colour among Kazakhs varies from prevalent jet black to red and sandy brown. Hazel, green and blue eyes are not uncommon.

Many are also skilled in the performance of Kazakh traditional songs. One of the most commonly used traditional musical instruments of the Kazakhs is the dombra, a plucked lute with two strings. It is often used to accompany solo or group singing. Another popular instrument is Kobyz, a bow instrument played on the knees.

The Kazakh language is a member of the Turkic language family, as are Uzbek, Kyrgyz, Tatar, Uyghur, Turkish, Azeri, Turkmen, and many other living and historical languages spoken in Eastern Europe, Central Asia, Xinjiang, and Siberia.

Kazakh, like most of the Turkic language family lacks phonemic vowel length, and as such there is no distinction between long and short vowels.
Kazakh was written with the Arabic script during the 19th century, when a number of poets, educated in Islamic schools, incited revolt against Russia. Russia’s response was to set up secular schools and devise a way of writing Kazakh with the Cyrillic alphabet, which was not widely accepted. By 1917, the Arabic script was reintroduced, even in schools and local government.

Kazakh is one of the principal languages spoken in Kazakhstan, along with Russian. It is also spoken in the Ili region of the Xinjiang Uyghur Autonomous Region in the People’s Republic of China, where the Arabic script is used, and in parts of Mongolia.

Islam was brought to the Kazakhs during the 8th century when the Arabs arrived into Central Asia. Islam initially took hold in the southern portions of Turkestan and thereafter gradually spread northward. Islam also took root due to the zealous missionary work of Samanid rulers, notably in areas surrounding Taraz where a significant number of Kazakhs accepted Islam. Additionally, in the late 1300s, the Golden Horde propagated Islam amongst the Kazakhs and other Central Asian tribes. During the 1700s, Russian influence toward the region rapidly increased throughout Central Asia. Led by Catherine, the Russians initially demonstrated a willingness in allowing Islam to flourish as Muslim clerics were invited into the region to preach to the Kazakhs whom the Russians viewed as "savages" and "ignorant" of morals and ethics. However, Russian policy gradually changed toward weakening Islam by introducing pre-Islamic elements of collective consciousness. Such attempts included methods of eulogizing pre-Islamic historical figures and imposing a sense of inferiority by sending Kazakhs to highly elite Russian military institutions. In response, Kazakh religious leaders attempted to bring religious fervor by espousing pan-Turkism, though many were persecuted as a result. During the Soviet era, Muslim institutions survived only in areas where Kazakhs significantly outnumbered non-Muslims due to everyday Muslim practices. In an attempt to conform Kazakhs into Communist ideologies, gender relations and other aspects of the Kazakh culture were key targets of social change.