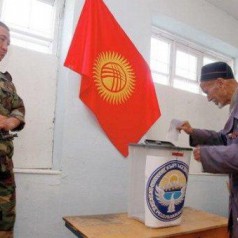 The Minister of Internal Affairs of Kyrgyzstan Zarylbek Rysaliev announced several attempts to bribe voters in the presidential elections, RIA Novosti reported. For attempting to bribe delayed by at least two people – one in the village Vorontsovka, the other in the village of Kara-Suu.

These cases are called sporadic, and the minister said that in general elections are held peacefully. There is no mass movement of citizens is not fixed – the agency quoted him as saying. The observer from the Russian Public Chamber also said that the vote takes place within the law.

At the same time as the Interfax, in Osh in southern Kyrgyzstan was formed an initiative group, demanding cancellation of elections. This requirement is due to the fact that some residents of Osh have not found their names on voter lists. We are saying that physically did not have time to include in the list. But just do not have time, we had to move the elections, – said the representative of the initiative group.

According to the chairman of the territorial election commission Osh Mamatalievoy Saadat, only received about 500 applications from voters who do not find themselves in the lists. It happens everywhere in Kyrgyzstan, the Central Election Commission makes a decision, – she said.

By 15:00 local time (13:00 GMT) voter turnout in the elections was 36 percent. In the election turnout there, so they will be recognized as valid in any case. Preliminary voting results will be announced after 18:00 Moscow time, when the polls will close.

In the presidential elections of 16 people attended. According to analysts, the best chance of winning are three candidates – Prime Minister of Kyrgyzstan Almaz Atambayev, the former speaker of the national parliament Adahan and ex-Minister of Emergency Situations Kamchibek Tashiev. If the result of voting no candidate wins more than 50 percent of the vote, the winner will be determined in the second round.